Panel to discuss the ethics of execution 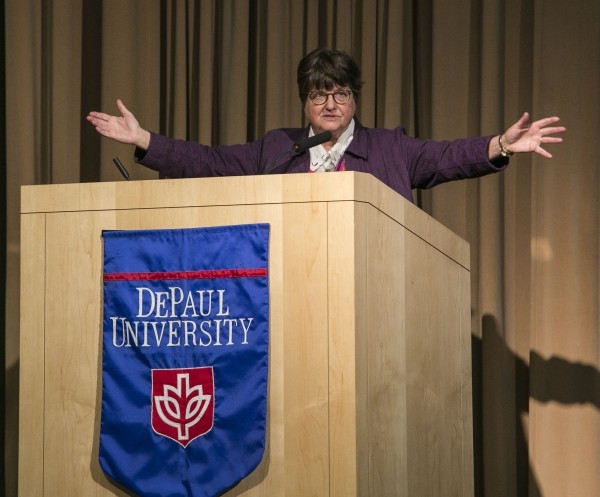 CHICAGO —(ENEWSPF)–April 17, 2017.  The current debate over capital punishment is the backdrop for a panel discussion on the ethics of execution at DePaul University April 19. Panelists include Sister Helen Prejean, C.S.J., an anti-death penalty activist; Frank Thompson, a retired prison superintendent; and Craig Klugman, professor of health sciences at DePaul.

Prejean has witnessed six executions in her role as a death row spiritual advisor. She has written a pair of books, “The Death of Innocents: An Eyewitness Account of Wrongful Executions” and “Dead Man Walking: An Eyewitness Account of the Death Penalty,” which was on the New York Times bestseller list for 31 weeks and has been translated into 10 languages. The 1996 Academy Award-winning movie, “Dead Man Walking,” is based on the book.

In 2011, Prejean donated her personal archives to DePaul, which include journals, notes from meetings, letters, speeches and other artifacts such as personal correspondence and manuscripts for her books. She makes an annual visit to campus to speak in classes and meet with leaders about the topic.

During his tenure as a prison superintendent with the Oregon Department of Corrections, Thompson oversaw two executions and has since changed his stance on capital punishment, writing opinion pieces for The New York Times and The Statesman Journal.

Klugman, a bioethicist, joined the health sciences department in DePaul’s College of Science and Health in 2013. He is an expert on the ethics of end-of-life scenarios, euthanasia, and assisted suicide. Klugman has written on the topics of physician involvement in war and torture and worked on the “Prison Health Project” in 1997 as a graduate student.

“During U.S. history, there has been an acknowledgement that execution is a cruel and inhumane punishment. The guillotine, the removal of automatic sentences of death, the electric chair, the gas chamber, and even lethal injection were all created to find a humane way to end a person’s life. Even among supporters of the death penalty, there has been a realization that there is something inhuman about state-sanctioned killing. In 1968, the Witherspoon v. Illinois case led to a nearly 10-year ban on executions in the U.S.,” said Klugman.

“From an ethics standpoint, Kant tells us that the deliberate taking of a human life is a violation of the moral law. One can also argue that the risk of killing even one innocent person outweighs any benefit of any execution,” said Klugman. “On the other side, John Stuart Mill believed in the death penalty when there is no doubt about guilt and when the person is generally bad. He said ‘to blot him out from the fellowship of mankind and from the catalogue of the living is the most appropriate.’”

Discussion topics are expected to include the ethics behind the death penalty, lethal injections and botched executions, and the roles of correctional and medical professionals in executions. The panelists will also address the series of planned executions and ongoing legal challenges in Arkansas.

“Audience members should expect a lively discussion about the morals, ethics and facts of execution in a civil society,” said Klugman.

Griffin Hardy will moderate the discussion. He is special projects coordinator for Prejean in DePaul’s Office of Mission and Values, which is hosting the event. Hardy also is communications coordinator for the Ministry Against the Death Penalty, a Catholic anti-capital punishment group founded by Prejean.

The discussion will begin at 6 p.m. in the Student Center, 2250 N. Sheffield Ave., Room 120B, on DePaul’s Lincoln Park Campus. Admission is free and open to the public. More at http://bit.ly/MV_Prejean.