ArtHouse Opens as Home for Entrepreneurship, Art and Community

Gary, Indiana–(ENEWSPF)–January 10, 2017
By Andrew Bauld
A feathery mix of purple, blue and green light glows from the newly opened ArtHouse: A Social Kitchen, a multipurpose space in downtown Gary, Ind. that’s becoming a destination for food, culture and art.

The once-underutilized building that’s now home to ArtHouse is wrapped in an installation titled Light-Lab. The steel and cables reflect the city’s proud manufacturing history, while colorful, handmade lanterns adorning the framework signal renewed energy. Inside is a culinary incubator, café, gallery, and community-gathering place.

ArtHouse is a partnership project bringing together Mayor Karen Freeman-Wilson, Gary city departments and community organizations, Place Lab, and Harris Public Policy. In November, the public opening attracted more than 300 attendees who had the chance to sample confections from local bakers, enjoy entertainment from local performers, tour the 15,000-square-foot space and witness the unveiling of the installation. 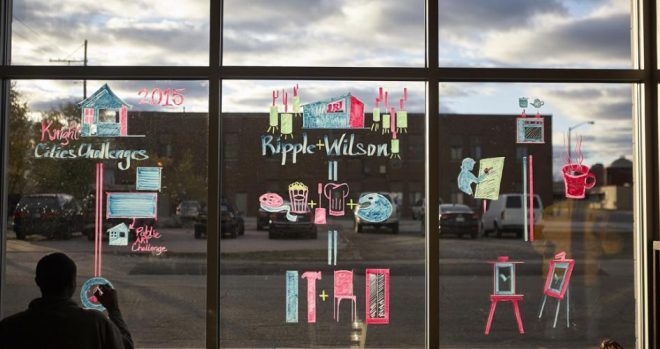 Light-Lab creators Jeana Ripple of Ripple Architecture Studio and Barbara Wilson, assistant professor at the University of Virginia School of Architecture and co-founder of Design Futures, were selected through a juried process of applicants from around the world. Ripple + Wilson partnered with Gary-based Live Art Studio to host workshops that brought area youth to explore the conceptual and technical aspects of the installation. The students ultimately assisted in assembling the lanterns.

“What we were looking for were projects that had terrific art, that were taking real chances but had strong local support that we thought could really address an important civic issue,” Levin said. “This fulfilled all those criteria. It really is trying to accomplish something on behalf of Gary with Gary.”

A project long in the making

The path to ArtHouse began in 2013 as part of a broader partnership between the city of Gary and Harris Public Policy—created by former Chicago Mayor Richard M. Daley, distinguished senior fellow at Harris. Through the partnership and its “Gary Practicum,” students assisted Freeman-Wilson and her staff with analysis and recommendations to help revitalize the city.

A 2013-14 team of Harris students produced recommendations for bringing more economic activity to downtown Gary, including the idea of transforming a vacant building into a business incubator. Freeman-Wilson embraced the idea and proposed a culinary focus. A second team of Harris students then provided analysis demonstrating need and recommendations for how a culinary business incubator could work.

At the same time, Gates and the then-newly formed Place Lab were in discussions with the city about transforming a vacant or underutilized building for an arts and culture project. The two ideas ultimately merged into a vision for economic development centered around food and culture. After site evaluation of many deteriorating structures in Gary, 411 E. 5th Ave was chosen.

Gates and the city of Gary are leading ArtHouse, while Harris students are working through the new Harris Policy Labs program with Bloomberg Philanthropies and Abt Associates to evaluate the impact and role of public art in urban economic development. To date, students have developed a preliminary evaluation framework as well as developed and conducted surveys of about 300 Gary residents.

“Every entrepreneur shares the same story of, ‘I know my product but I don’t know how to market it,’” says Michele Larimer, project manager of ArtHouse. “So we’re providing those resources. We’re creating relationships with reputable lenders and banks to get them through those stages of lending.”

That’s the goal for Allegra Parnell, an incubator participant. A self-taught baker, she currently works out of her Gary home, but wants to open a shop downtown. For Parnell, ArtHouse is a welcome addition to the city.

“This is something that the community does need,” Parnell said. “We don’t have to go to Chicago or Michigan City. We need something for us right here in the heart of Gary, and I am just ecstatic that ArtHouse is here.”

That enthusiasm was reflected at the opening in November, and Gates was encouraged by the crowd.

“The wonderful part is that so many people who live in Gary are just hanging out,” Gates said. “It’s really nice to see new friends from Gary and old friends from Chicago coming to both be curious but also to eat some good food and hear some music. Already the art is doing what it’s supposed to do, which is just bring people together.”