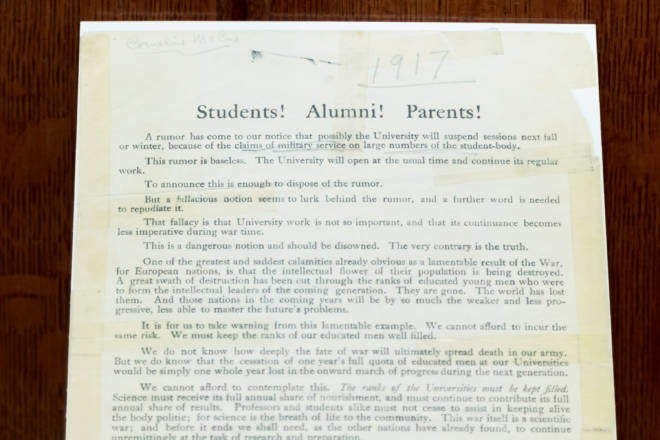 A 1917 letter from then-DePaul President Francis X. McCabe, C.M., to the faculty, staff and students telling them that the university would remain open during the Great War. (DePaul University/Jeff Carrion)

CHICAGO —(ENEWSPF)–April 11, 2017.  When U.S. President Woodrow Wilson declared war on the German Empire April 6, 1917, one Lincoln Park neighborhood family with DePaul University ties was changed forever. Now 100 years after the U.S. joined the Great War, known more commonly as World War I, the story of the Ward family — and their ties to the university, St. Vincent de Paul Parish and Chicago — is the subject of a new exhibit titled “Glimpses of the Great War.” The display of memorabilia will run through August at the John T. Richardson Library on DePaul’s Lincoln Park Campus.

“’Glimpses of the Great War’ is sort of a commemorative exhibit in honor of the centennial of World War I, but it really touches on a critical time for the university with expansion, new programs and the addition of women students,” said Andrea Bainbridge, university archivist. “The exhibit looks at DePaul leading up to the war and in the decade following as it was growing. DePaul really became a modern university during that time period, especially in the 1920s.”

The exhibit centers on the Ward family and their nine children who grew up on Fullerton Avenue, four blocks from St. Vincent de Paul Parish in Chicago, according to Bainbridge. All eight male children attended DePaul Academy, a high school run by the parish. Five served in the Great War and two died. Brothers William and Joe were enrolled at the Vincentian Seminary in Perryville, Missouri, preparing to be priests, during the war, added Lisa Geiger, special collections’ archives processing assistant.

In the years following ordination, William returned to Chicago as principal of DePaul Academy as part of eight decades of service to the order that took him around the world. Joe, meanwhile, became a DePaul University English professor and later served as the coordinator of college alumni before passing away in 1978. At the time of Joe’s passing, DePaul’s enrollment had risen to more than 12,000, a significant difference from the roughly 300 who attended with the Wards in the early days of the university, according to Geiger.

“We talk all the time in special collections about whose history we are trying to preserve; DePaul’s, the Vincentians’ and Lincoln Park’s. The story of the Wards checks all three boxes,” said Bainbridge. “Their story goes a lot deeper than we originally thought. This family is present across all these different groups of records. The process of discovering just how deep the ties are between this family, the parish and the neighborhood was amazing. To me, that’s why it’s such a great story and one that’s perfect for the library’s Special Collections and Archives department to tell.”

Bainbridge — with the help of Geiger — unearthed photos, memorabilia and letters from the 1910s to the 1970s, which reveal the changes to DePaul’s campus and the family. Items in the exhibit include:

All told, 584 people with DePaul ties including undergraduates, alumni and faculty members served in the military during World War I, according to Bainbridge.

The exhibit, which is open to the public through August, is on the first floor of the John T. Richardson Library, 2350 N. Kenmore Ave. Students, staff and community members are invited to an opening reception from 4-6 p.m. April 12.