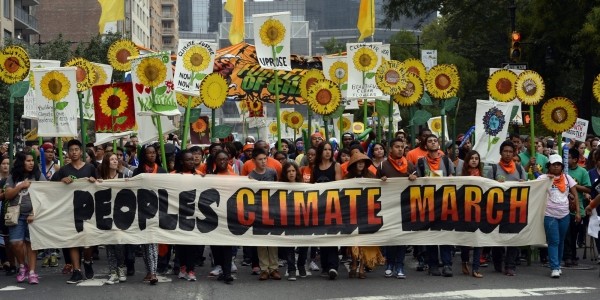 WASHINGTON, D.C. –(ENEWSPF)–April 28, 2017.  Climate activists throughout the country will participate in a major “People’s Climate March” on Saturday, April 29th. The effort is being organized by the coalition formed out of 2014’s People’s Climate March, which brought over 400,000 people to the streets of New York City and many more around the world.

The April 29th march comes in response to widespread outrage against President Trump’s disastrous anti-climate agenda along with his attacks on health care, immigrants, and programs and policies that improve the lives of all Americans.

More than 145 protests in local communities took place across the country in the first 100 hours of the Trump presidency, demonstrating widespread opposition to the administration’s anti-environment and corporate agenda as part of an ongoing campaign organized by the People’s Climate Movement. You can find an event near you here. https://peoplesclimate.org/

“President Trump’s First 100 Days plan is a clear sign that he will fast-track profits for corporations before he invests in the needs of the American people.

“Now is the time to come together and build an economy where investments are made to benefit workers, communities of color and low-income folks – an economy that is structured to reflect the fact that black, brown and indigenous lives matter,” she said.

Background and History:  The People’s Climate Movement grew out of the largest climate march in U.S. history in New York in September of 2014, creating a groundbreaking coalition of green and environmental justice groups, labor unions, faith, students, indigenous peoples and civil rights groups working to advance a climate agenda rooted in economic and racial justice.

With the 100 days of action and April march, this coalition will leverage their power once again, to resist the Trump administration and corporate leaders’ efforts to thwart or reverse progress towards a more just America.

Now more than ever, it will take everyone to change everything. So, the People’s Climate Movement is calling on everyone to join in resisting Trump, his crooked administration and the one percent who are running our country.

For more information on The People’s Climate Movement and the mobilization on April 29th, please visit: https://peoplesclimate.org/