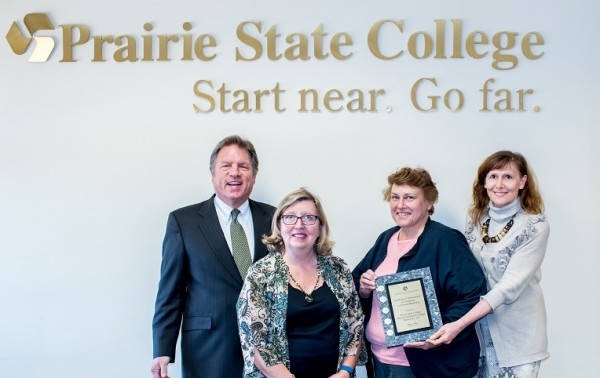 During the recent meeting of the Board of Trustees at Prairie State College (PSC), the college was recognized with a Certificate of Achievement for Excellence in Financial Reporting from the Government Finance Officers Association. Presenting the award to PSC was (second from left) Mary Dankowski, finance director at the Village of Park Forest. Accepting the award on behalf of PSC were (from left) Thomas D. Saban, vice president of finance and administration; Carolyn Ostroski, senior accountant; and Marina Krtinic, controller and director of business services.

CHICAGO HEIGHTS–(ENEWSPF)–July 7, 2017. Prairie State College (PSC) recently was awarded a Certificate of Achievement for Excellence in Financial Reporting (CAFR) by the government Finance Officers Association of the United States and Canada (GFOA).

The award was presented to members of the PSC Finance and Administration Department by Mary Jankowski, finance director at the Village of Park Forest, during the June meeting of the PSC Board of Trustees.

According to the GFOA, the CAFR is considered the “highest form of recognition in the area of governmental accounting and financial reporting, and its attainment represents a significant accomplishment by a government and its management.”

“I want to congratulate Vice President of Finance and Administration Dr. Thomas Saban and his team on such a significant recognition,” said PSC President Dr. Terri L. Winfree. “The high standards of the Finance and Administration Department and the quality employees that are a part of the department’s day-to-day operations are clearly reflected in this accomplishment.”