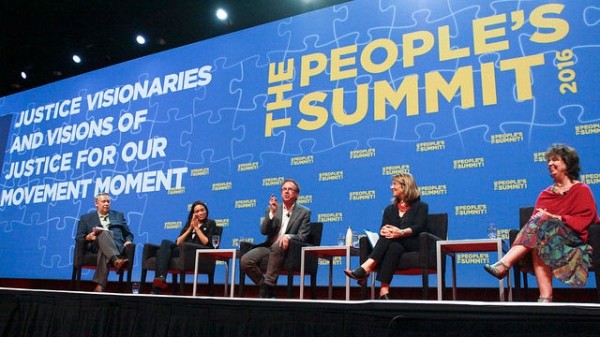 CHICAGO–(ENEWSPF)–May 24, 2017. Sen. Bernie Sanders will keynote a major gathering of several thousand progressive activists from across the U.S. in Chicago June 9 to 11 under a thematic of moving beyond resistance to a building a broad people’s movement for a just world.

Titled “The People’s Summit,” the event will bring together grassroots activists and leaders of key progressive organizations to chart strategies and build unity in calling for promoting a progressive vision that moves beyond resistance and protests.   through and beyond the November, 2016 election.

The People’s Summit “Beyond Resistance: A People’s Movement for a Just World” will take place June 9 through June 11 at McCormick Place, 2301 South King Drive in Chicago.

This year’s Summit follows a highly successful gathering of the first People’s Summit last June in Chicago that also brought together many of those who have played leading roles in public actions and protests this year.

Scheduled participants for this year’s People’s Summit include:

The program also includes The People’s Speak, prominent actors reading excerpts from American history based on the writings of Howard Zinn.

What They’re Saying About the People’s Summit 2.0

“What has consistently unified us is a common vision of opposition to policies of austerity and neo-liberalism, and solidarity in supporting each others’ work on health care, environmental, racial, social, and economic justice, and breaking the corporate grip on our political and economic system” –RoseAnn DeMoro, executive director, National Nurses United, a major convener of the event.

“I am excited to join the chorus of conscious, committed voices at the 2017 People’s Summit. There is no force more powerful than a community on the move for justice. We will protest, we will plan and we will preserve in the building of political power from the ground up. This is our moment” – former Ohio State Senator Nina Turner, Our Revolution Board member

“Looking forward to returning to The People’s Summit 2.0 In Chicago 6/9-11.  #PPLSummit is an antidote for what ails our great nation. A gathering of outspoken progressive activists and big-hearted visionaries who speak for every citizen concerned about the erosion of our Constitutional freedoms and the rollbacks introduced by this new Administration.  Mid-Terms are next year.  Let’s get to work!” –  Frances Fisher

“With our institutions of liberal democracy severely eroded and fascism knocking at our front doors, the time is now for activists, organizers, and Berniecrats to come together and imagine an America and world that looks far beyond the horizon of establishment politics as usual” – Winnie Wong, People For Bernie

“Resistance can’t be about restoration. It must be about fundamental reform. That’s why progressive movements, media and leaders must take the lead—both in exposing Trump’s betrayals and driving bold alternatives and solutions” – Katrina vandenHeuvel, editor, The Nation

“If there was ever a moment to come together, this is it–in Trump times the only defense is a good offense.”
– Bill McKibben, environmentalist

“Our Revolution looks forward to joining Jane and Bernie Sanders, our own Nina Turner and thousands of active leaders from our partner groups at the People’s summit in June. We view the Summit as an opportunity to assess the past year, and move from resistance to the political revolution we are building together” – Larry Cohen, Our Revolution

“The current political climate is threatening the very fabric of our democracy. Fundamental rights like access to healthcare and the protection of our air and water are under attack. Ensuring a just future for America will require a broad, resilient grassroots movement that puts people over corporate profits. This is what the People’s Summit will work to support”
– Wenonah Hauter, executive director, Food and Water Watch

“The People’s Summit brought the fledgling people’s movement together last June, and that was transformative. The opportunity to engage proactively with others who believe in social justice, climate sanity, peace and equality gave us tremendous lift and focus during a period when that was essential. Silos crumbled, new alliances were forged.  We are ready for more at PS 2017” – Donna Smith, executive director, Progressive Democrats of America

“President Trump exploited long-standing racial divisions between working people to gain power, when we know he’s packed his cabinet with the same characters who rigged the economy. We all need to team up and fight back, and pro-corporate Democrats aren’t doing that effectively. The People’s Summit helps us make the alliances we need against capitalism at its worst”  – Maria Svart, national director, Democratic Socialists of America.

“A radical, racist right wing that cares more about profit than people or our planet is in power in Washington and most of our state capitals. We have joined millions of Americans in resistance, from congressional town halls to airport protests to shareholder meetings of corporations like Disney that have abetted and are complicit in this right wing’s rise. But with our allies in the 2017 People’s Summit we are moving beyond resistance to a political revolution; from protest to power. We will advance a new movement politics that will recruit, elect and co-govern with a slate of candidates who will put people and our planet before profit.” – George Goehl, co-director, People’s Action

“The people need to get together so the people need a summit! We all know that progressive positions are actually the most popular political positions in America. The Peoples Summit gives us a chance to come together, understand our strength, rally, and make plans for the future” – Josh Fox, filmmaker

“What do you get when you bring real progressives, women of color, and young organizers together under one roof? The People’s Summit – a gathering of the some of the most powerful leaders of the resistance. Looking forward to building and scheming towards justice and equality for all Americans.” – Linda Sarsour, activist

“We don’t have time to please donors and discuss 20 year plans. We don’t have time to play politics to please special interests. Our democracy is at stake and the only ones who can reclaim it are we, the People. The People’s Summit is where we build our blueprint and action plan to save our Republic. You can’t buy back democracy, you have to fight for it.” – Nomiki Konst, journalist

“We are angry, we are united, we are ready and we know our time has come. Now we just need to create the new progressive vision, tactics and plan – the Peoples Summit has all the right people, energy and ingredients to make that happen” – Eve Ensler, playwright, activist