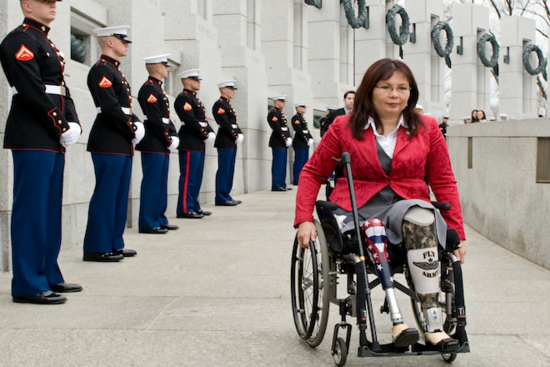 WASHINGTON, D.C. –(ENEWSPF)–May 26, 2017.  Today, combat Veteran and U.S. Senator Tammy Duckworth (D-IL) joined U.S. Senator Elizabeth Warren (D-MA) and 16 of their colleagues in outlining how President Trump’s budget and health care plan would jeopardize health care for more than 60,000 Veterans in Illinois and nearly 2 million Veterans across the country who depend on Medicaid to get the coverage they have earned. Trumpcare would cut Medicaid by $834 billion and eliminate the Affordable Care Act’s Medicaid expansion, which 340,000 veterans use for health coverage. The budget President Trump proposed this week would slash Medicaid by an additional $610 billion, which would put the well-being of Veterans, their families, and millions of other Americans at risk. The President’s proposals are a direct violation of his campaign promise to improve Veterans’ health care and make sure “our Veterans get the care they need.”

“Your proposed cuts to Medicaid and your efforts to take away people’s health coverage are inconsistent with the promises you made to America’s veterans. They deserve better,” wrote the Senators. “We urge you to consider the impacts that gutting Medicaid would have on the lives and health of those who have sacrificed so much in service to our nation.”

The Senators also raised significant concerns about the impact of slashing investments in behavioral health research on America’s Veterans, who struggle with higher rates of substance use disorder and post-traumatic stress disorder than the general population. President Trump’s budget would cut the National Institutes of Health by 20%, leaving the National Institute of Mental Health and the National Institute on Drug Abuse with less resources to support research for treating substance use disorder, post-traumatic stress disorder, and traumatic brain injuries. It would also eliminate nearly $400 million from the Substance Abuse and Mental Health Services Administration, which helps communities fight the opioid epidemic.

Full text of the letter is below.

We are writing to express our grave concern about the impact that your proposed cuts to Medicaid would have on America’s veterans and their access to health care. During your campaign and since you assumed office, you have repeatedly promised to “get our veterans the care they need wherever and whenever they need it.” Preserving Medicaid is essential to keeping this promise. While many veterans can get health care through the Department of Veterans Affairs, nearly two million veterans – one out of every ten – rely on Medicaid for health coverage.

Your budget proposal and support for the American Health Care Act (AHCA) do not live up to your promise to ensure that veterans have access to the care they need. The AHCA would repeal the Affordable Care Act (ACA), ripping away care from 23 million Americans and slashing Medicaid by $834 billion. Because of the ACA, the uninsured rate for veterans decreased by almost 40 percent, and 340,000 of the veterans now enrolled in Medicaid receive coverage through the ACA’s Medicaid expansion, which the AHCA would eliminate. Your FY2018 budget proposes over $610 billion in additional cuts to Medicaid. These “draconian” cuts to the nation’s social safety net are an “assault” on veterans and their families – and on millions of other Americans.

Although your proposed budget would gut many programs important to veterans, including student loan funding, nutrition assistance, and disability payments, cuts to Medicaid would be particularly devastating. In addition to physical health problems, such as chronic pain and traumatic brain injury (TBI), veterans struggle with post-traumatic stress disorder (PTSD) and substance use disorder (SUD) at higher rates than the general population. Your budget states that it would “increase the focus on serious mental illness,” but it strips nearly $400 million away from the Substance Abuse and Mental Health Services Administration (SAMHSA) and flat-funds key initiatives for fighting the opioid epidemic. To make matters worse, you also want to slash funding for the National Institute of Mental Health and the National Institute on Drug Abuse by 20 percent, cutting them by $301 million and $210 million, respectively. These institutes provide crucial support for research and development on TBI, PTSD, and SUD.

Your proposed cuts to Medicaid and your efforts to take away people’s health coverage are inconsistent with the promises you made to America’s veterans. They deserve better. We urge you to consider the impacts that gutting Medicaid would have on the lives and health of those who have sacrificed so much in service to our nation.