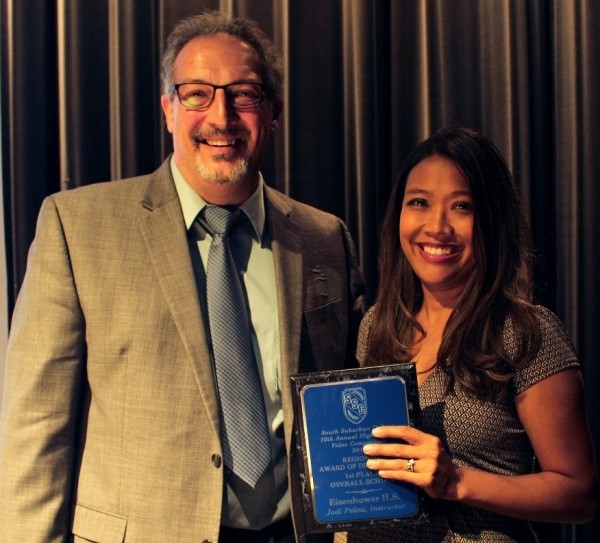 “It’s important for my students to tour South Suburban College because they just don’t realize how amazing facilities are so close to home,” said Eisenhower High School teacher, Jodi Pelini. Michael Jones, parent of Bremen High School senior/competition participant, Brittany Jones, felt it was beneficial for South Suburban College to host a video competition for high schoolers because students get familiar with SSC’s options. He was impressed with the variety of videos he saw at the event. Brittany and some of her classmates placed 3rd in the PSA and Music Video categories.

Angie Zavala, a senior at Eisenhower High School, took home two 1st place trophies and three 2nd place ribbons. When Zavala graduates, she plans to continue her education and has a goal of entering the film industry as a director. Zavala was ecstatic to see how many awards she won and said, “I enjoyed looking at my peers’ video submissions during the award ceremony the most.” Her partner on the music video submission that took 1st place was junior Brianna Smith. She wants to create a book series and adapt those books into film. Smith enjoyed watching video clips of nominees on the big screen to see how she can improve her submissions for next year’s competition.

In addition to the student awards, high schools competed for the Regional Award of Distinction. Eisenhower High School won this year’s award having the highest average score per entry. “I love the way the awards are announced,” said Pelini. “This competition allows students to take pride in their work and get recognized for hard work.”

The student awards for each category are as follows:

For more information about all of SSC’s programs, admissions and registration, please visit www.ssc.edu or contact the Admissions Office at (708) 210-5718.