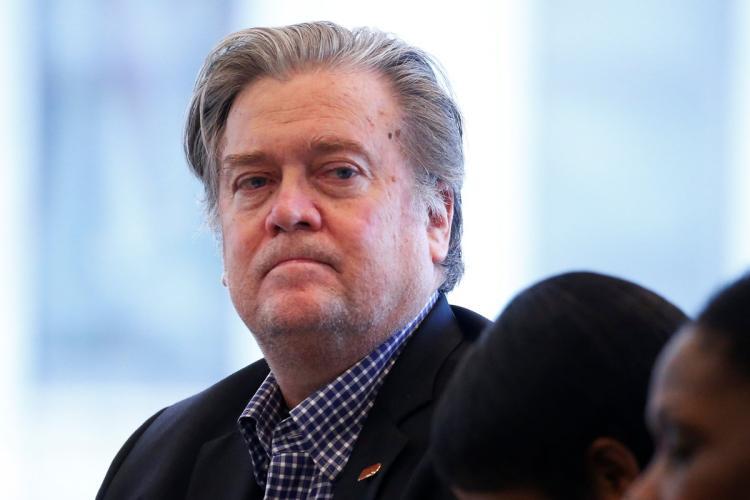 During a 2011 interview, Trump’s new campaign CEO in action. Nothing’s changed from 2011, but now he has the vehicle of Trump’s campaign to promote his hatred further.

Bannon said, “That’s why there are some unintended consequences of the women’s liberation movement. That, in fact, the [conservative] women that would lead this country would be pro-family, they would have husbands, they would love their children. They wouldn’t be a bunch of dykes that came from the Seven Sisters’ schools up in New England. That drives the left insane and that’s why they hate these women.”

Listen to the deplorable Bannon: Bannon On Dykes

The new leader of team Trump fits right into the misogynist and LGBT bashing train.

One can disagree with the stands on feminism, family, or other social issues with anyone in the public sphere. We Progressives routinely criticize and even lambaste Ann Coulter, Michele Bachmann, and Sarah Palin. But our standard is, we do so based on their ideas, not their gender. And if we get caught inserting their gender into the argument, Progressive commenters won’t let anyone here or elsewhere in liberal media get away with it. It’s not acceptable discourse.

Any conservative woman pundit or politician could be a “dyke” from a “Seven Sisters school”and we’d argue the issues, not her gender or sexuality, except perhaps from the standpoint of hypocrisy.

Steve Bannon is a spiteful misogynist, and he is an executive in the campaign of the Republican Party’s candidate for President of the United States. Good luck with that woman voter outreach, Reince Priebus.

Bannon is a real piece of work. This is exactly the intolerance and pure hatefulness a Trump Presidency would heap on America.