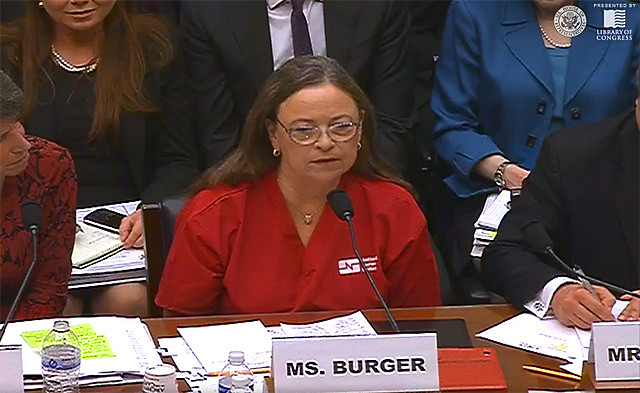 Silver Spring, Maryland–(ENEWSPF)–October 24, 2014.  Following a Congressional hearing Friday morning in Washington on Ebola and the latest confirmed Ebola patient in New York Thursday, National Nurses United said a major gap remains in U.S. preparedness – the failure of the federal government, both Congress and the White House, to mandate all hospitals to implement the highest standards and protocols to protect nurses, other health workers and the public.

NNU, represented in the hearing by co-president Deborah Burger, RN, expressed thanks to committee chair Rep. Darrell Issa of California and Rep. Elijah Cummings of Maryland for convening the hearing, and especially Cummings for pressing NNU’s call for a mandate. Afterwards, NNU stressed here must be no more delays.

“We are not interest in more communication between various agencies. We are solely interested in a mandate directing every hospital, every U.S. health facility, to immediately implement the optimal precautions, in both personal protective equipment and proper training,” said NNU Executive Director RoseAnn DeMoro.

“An ‘abundance of caution,’ which we heard advocated in the hearing, has little meaning in the absence of the clout of an enforcement mechanism. It is unconscionable that the hospitals do not have the optimal standards and protocols already in place to protect our caregivers – and that our top representatives in both branches of government are not directing them to do so,” DeMoro said.

“We know these hospitals. Their priority is not optimal Ebola preparedness, it is protecting their budgetary goals and profit margins. Unless there is an Act of Congress or an executive order from the White House, they will opt for the cheapest standard, not the best. The legislators, the White House, the Centers for Disease Control and Prevention need to stop enabling them by failing to act,” DeMoro said.

In testimony today, NNU Co-President Deborah Burger, RN also emphasized the critical importance of a formal mandate on the hospitals.

After the hearing, Burger noted, “the CDC guidelines are a pull down menu, the hospitals can choose among them, they will invariably choose the cheapest.  But even if the CDC had a single, optimal standard, they do not have the authority to mandate it, which is why we’re calling on the President and Congress to act.”

In her formal testimony to the committee, Burger noted, “The Ebola pandemic and the exposure of health care workers to the virus in Texas and the real threat that it could occur elsewhere in the US, represent a clear and present danger to public health… The risk of exposure to the population at large merely starts with frontline caregivers like registered nurses, physicians and other healthcare workers – it does not end there. If we cannot protect our nurses and other healthcare workers, we cannot protect anyone.”

NNU is continuing inviting the public to join with nurses in signing an online petition demanding such a mandate from the President and Congress.

It calls for providing all nurses and other healthcare workers with the protection of full-body HazMat suits that are body fluid, blood, and virus impermeable that:

Include powered air purifying respirators with an assigned protection factor of at least 50, with full hood.

Leave no skin exposed or unprotected.

And that this protective equipment must be implemented in all hospitals with rigorous, continuous hands-on training for all RNs and other frontline caregivers with practice, in teams, of the proper means for putting and, especially, removing the equipment after use (donning and doffing).

The petition may be signed at http://www.nationalnursesunited.org/page/s/national-nurses-united-urges-you-to-take-action-now