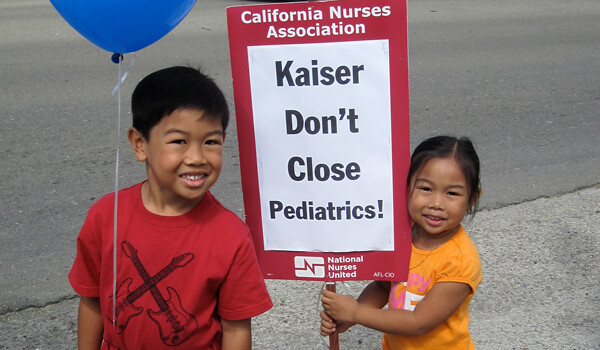 CALIFORNIA–(ENEWSPF)–April 17, 2012. Several hundred children, parents, and concerned community members along with RNs will hold a children’s march and rally to protest the closure of the pediatrics unit at Kaiser Permanente located in Hayward. Over 2,000 young children and teenagers received care in the Kaiser Hayward inpatient pediatrics unit in 2011 alone, Kaiser RNs report. Kaiser is planning to close the unit despite record profits.

The closure will force southern Alameda County families with children who need to be hospitalized to drive to Oakland, Santa Clara, or Roseville for care. Currently, the Hayward inpatient pediatrics unit serves children who live in a geographic area that includes Hayward, Fremont, Union City, San Lorenzo, San Leandro, and Castro Valley. Kaiser’s decision, if not reversed, would result in families being forced to take additional time off work, spend more time away from home, and pay additional costs in commuting and overnight accommodations.

“Unfortunately for a lot of the kids that we see in our unit, a stay in the hospital isn’t a one-time event,” said Winny Knowles, a 28-year veteran RN at the Hayward facility. “Many of our pediatric patients have chronic conditions such as asthma, seizures, and metabolic disorders. Many come from working families who either rely on public transportation or who have heavy work demands. This closure would be a tremendous burden.”

Kaiser is building a nearby hospital in San Leandro slated to replace much of the Hayward facility, yet has made no plans to include a inpatient pediatric unit. “What we are asking for is pretty simple,” said Knowles. “A few beds dedicated to pediatrics, so when very sick kids come in they can be taken down the hall, not forced to commute on crowded freeways. We’re hoping for a change of heart and a change in priorities.”

“Kaiser should be helping our children and their families thrive, not forcing them to drive,” said Dinorah Amaya, a community activist and president of the Hayward PTA, who is fighting the closure. “There are nearly half a million members in Southern Alameda County that the current unit serves. This proposed closure would be harmful to these communities.”

Thus far, more than 3,000 postcards have been sent to Kaiser from members pleading with Kaiser to reverse their decision.