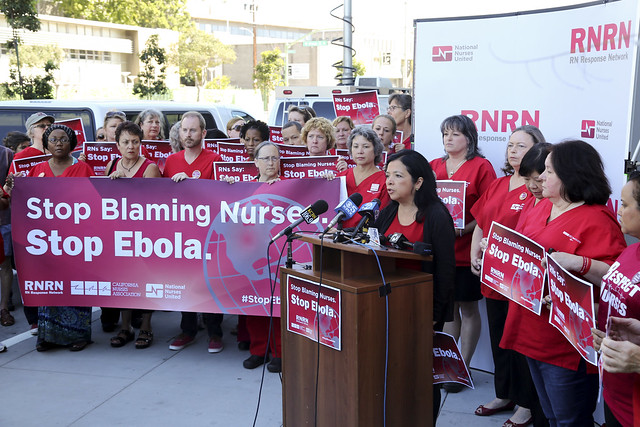 Silver Spring, Maryland–(ENEWSPF)–October 12, 2014.  Following news Sunday that the first U.S. nurse has now tested positive for the deadly Ebola virus, National Nurses United called for all hospitals to have in place the highest standard of optimal protections, including Hazmat suits, and hands-on training to protect all RNs, other hospital personnel to confront Ebola.

“There is no standard short of optimal in protective equipment and hands-on-training that is acceptable,” said RoseAnn DeMoro, executive director of National Nurses United, the largest U.S. organization of nurses.

“Nurses and other frontline hospital personnel must have the highest level of protective equipment, such as the Hazmat suits Emery University or the CDC themselves use while transporting patients and hands on training and drills for all RNs and other hospital personnel, that includes the practice putting on and taking off the optimal equipment,” DeMoro said Sunday.

NNU will host a national call-in conference call Wednesday with nurses across the U.S. to discuss concerns about U.S. hospital readiness for Ebola.

“Our call was set before today’s announcement based on steady reports from nurses at multiple hospitals who are alarmed at the inadequate preparation they see at their hospitals. The time to act is long overdue,” DeMoro said.

On the Wednesday call, National Nurses United, which has been surveying nurses across the U.S. has been calling on U.S. hospitals to immediately upgrade emergency preparations for Ebola — including proper hands on training for RNs and other hospital personnel and keep proper protective equipment fully supplied for immediate use.

Hundreds of RNs are expected to call in on Wednesday for a discussion, and to ask questions, about U.S. hospital preparedness. The call is at 3 p.m. EST, 12 noon PST.

As of Sunday mid-day, 2,000 RNs at more 750 facilities in 46 states and the District of Columbia have responded to the NNU national survey.

NNU is calling for all U.S. hospitals to immediately implement a full emergency preparedness plan for Ebola, or other disease outbreaks. That includes:

Full training of hospital personnel, along with proper protocols and training materials for responding to outbreaks, with the ability for nurses to interact and ask questions.

Adequate supplies of Hazmat suits and other personal protective equipment.

Proper procedures for disposal of medical waste and linens after use.

NNU is also calling for significant increases in provision of aid, financial, personnel, and protective equipment, from the U.S., other governments, and private corporate interests to the nations in West Africa directly affected to contain and stop the spread of Ebola.