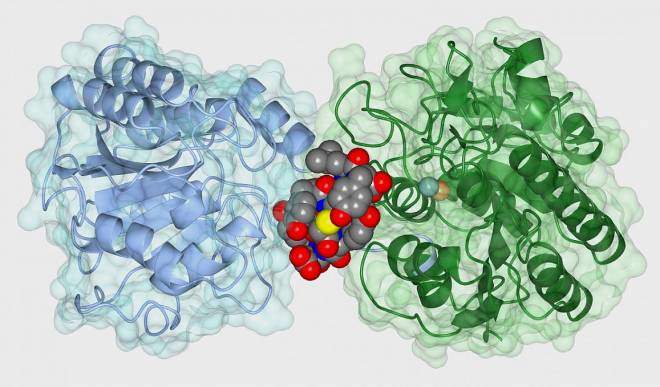 The cyclic peptide ipglycermide binds to an iPGM enzyme, blocking its activity.

Bethesda, Maryland–(ENEWSPF)–April 3, 2017. Research teams from the National Institutes of Health and abroad have identified the first inhibitor of an enzyme long thought to be a potential drug target for fighting disease-causing parasites and bacteria. The teams, led by NIH’s National Center for Advancing Translational Sciences (NCATS) and University of Tokyo scientists, sorted through more than 1 trillion small protein fragments called cyclic peptides to uncover two that could shut down the enzyme. The finding, reported April 3, 2017 in Nature Communications, could set the stage for the potential development of new types of antimicrobial drugs.

“The work is an excellent demonstration of how NCATS delivers on its mission to provide improvements in translational processes,” said Anton Simeonov, Ph.D., scientific director, NCATS Division of Pre-Clinical Innovation. “Scientists have shown that a therapeutic target, previously considered undruggable by pharmaceutical companies, is actually druggable through a non-traditional therapeutic agent.”

The target enzyme, cofactor-independent phosphoglycerate mutase (iPGM), is found in both parasites and bacteria. Several types of parasitic roundworms have iPGM, including Brugia malayi and Onchocerca volvulus, which infect roughly 150 million people living mostly in tropical regions. These parasites can cause devastating infectious diseases, such as river blindness. The enzyme also is found in bacteria, including Staphylococcus aureus, which can cause the hospital-borne infection MRSA (methicillin-resistant Staphylococcus aureus), and Bacillus anthracis, which causes anthrax.

Current anti-parasitic drugs, such as ivermectin, mainly work on the early larval stages of the worm. Such a treatment must be given annually or semiannually for as long as a decade. For years, scientists have tried to find a more effective drug that also worked against the adult worm and the later stages of infection. Earlier studies by Inglese’s collaborators at New England Biolabs in Ipswich, Massachusetts, showed that iPGM is one of many essential enzymes the roundworm needs to survive. It is part of a common biological process called glycolysis, which helps make energy for cells. While the same important process occurs in human cells, it relies on a different form of the enzyme. As a result, a drug that targets iPGM and kills the roundworm would likely leave the human counterpart alone. Such a drug might work on all life stages of the worm, and the infection could possibly be treated acutely, akin to an antibiotic. However, their previous attempts at finding a compound to block the enzyme have failed.

Enzymes are proteins that jumpstart chemical reactions. Most enzymes have pocket-shaped “active sites” into which a molecule fits, and on which the enzyme acts. Small molecule drugs can fit in active sites and prevent, or inhibit, the enzyme from doing its biological job. But iPGM and other similar enzymes are different. iPGM has a short-lived, temporary active site, making it practically impossible to find a small molecule drug that can block the enzyme.

Because of the enzyme’s unusual design, the NCATS-led team sought a different type of drug than the typical small molecule drugs. Inglese collaborated with co-corresponding author Hiroaki Suga, Ph.D., at the University of Tokyo, to build a library mixture of more than 1 trillion small peptides. The team went one step further, adding an amino acid to the peptides to create ring-shaped cyclic peptides, which the scientists hypothesized would have the needed shape and structure to attach to the enzyme surface and disable the enzyme.

The team subsequently worked with structural biologists at the University of Kansas, Lawrence, to determine the structure of the iPGM-cyclic peptide arrangement, showing how the peptide prevented the enzyme from working properly. “The cyclic peptide has amazingly tight and selective affinity for iPGM, like an antibody,” Inglese said.

Researchers from other institutions, including the National Institute of Standards and Technology, Gaithersburg, Maryland, the National Heart, Lung and Blood Institute, part of NIH, and Argonne National Laboratory, Argonne, Illinois, also participated in the work.

About the National Center for Advancing Translational Sciences (NCATS): To get more treatments to more patients more quickly, NCATS incorporates the power of data, new technologies and strategic collaborations to develop, demonstrate and disseminate innovations in translational science. Rather than targeting a particular disease or fundamental science, NCATS focuses on what is common across all diseases and the translational process. Learn more at https://ncats.nih.gov.