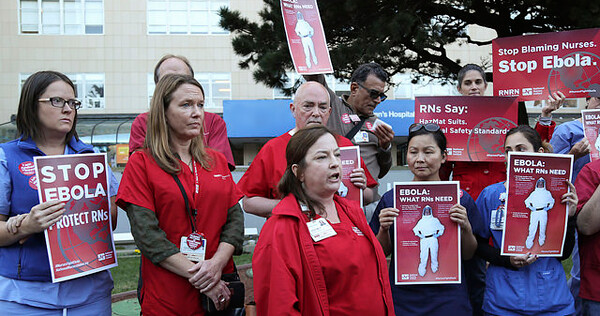 Nurses to Hold Press Conference Tuesday in Washington on Next Steps

Silver Spring, Maryland–(ENEWSPF)–November 17, 2014.  National Nurses United today called on the the U.S. Occupational Safety and Health Administration and other states to follow the landmark mandatory safeguards established by California to protect nurses, other health workers, and the public from the threat of the deadly Ebola virus.

NNU will hold a press conference Tuesday morning at 10 a.m. EST in Washington in front of the Department of Labor, 200 Constitution Ave. NW to announce details of a stepped up effort nationally, based on the California model.

NNU/CNA leaders will also hold a press conference Tuesday in Sacramento, Ca at 12:30 p.m. PST to discuss the next steps nationally, and how nurses will work to monitor and enforce the new California standards on the North Steps of the State Capitol prior to a state legislative hearing on Ebola preparedness.

Late Friday, California state officials released updated Ebola guidance for all California hospitals that require the optimal level of personal protective equipment, comprehensive training procedures, and other protocols that mirror the standards NNU and the California Nurses Association RNs have campaigned for in California and across the nation for two months.

More than 60,000 people have signed a national on-line petition calling for the federal government to require hospitals to adopt the optimal Ebola safeguards. The petition may be viewed at http://www.nationalnursesunited.org/page/s/national-nurses-united-urges-you-to-take-action-now

Just last week, 100,000 RNs and other health workers participated in a global day of Ebola awareness, sponsored in the U.S. by NNU, to demand the highest level of protections.

NNU will press for legislation and regulation in other states, and continue to demand the federal government enact mandatory guidelines all hospitals must follow for Ebola and other epidemics modeled on the California standards.

“Nurses have raised their voices, and California, under the leadership of Gov. Jerry Brown, has listened, acted, and once again set a benchmark for the nation,” said NNU and CNA Executive Director RoseAnn DeMoro.

“California nurses, other health workers and the public will be safer, but Ebola and other pandemics know no borders. Federal officials and other states should adopt the same standards. If California can act, all our other elected leaders and agencies can as well,” DeMoro said.

NNU notes the standards go well beyond the faulty procedures and protective gear employed by hospitals across the U.S., and the current, unenforceable recommendations of the federal Centers for Disease Control and Prevention.

By contrast, California regulations are mandatory. If hospitals don’t comply with the new guidelines, they will face civil penalties, noted Cal OSHA’s Sum. CNA will closely monitor hospital compliance with the guidelines, and work closely with Cal-OSHA on enforcement.

“With the hospital industry dismissing the concerns of the nurses, and the federal government failing to order the hospitals to implement the optimal level of Ebola protection, California, under the stewardship of Gov. Brown, has heard the voices of nurses, and established a model that all should follow,” said CNA Co-President Zenei Cortez, RN.

“The nurses are fighting for the public. They went to the governor demanding action.  He departed from the paralysis of government and corporate inaction. He listened intently and heard the nurses reports of how deeply unprepared and resistant hospitals were and he moved to protect the public, the nurses, and other health care workers,” DeMoro said, adding, “That’s how government should work, Gov. Brown has delivered an example for the nation.”

In addition to Gov. Brown’s leadership, the nurses also praised the diligent work of Cal OSHA in developing guidance on the standards.

The California regulations embody the precautionary principle NNU has advocated in response to Ebola, that absent scientific consensus that a particular risk is not harmful, especially one that can have catastrophic consequences, the highest level of safeguards must be adopted, and a sharp contrast to the profit principle that has guided the response of most hospitals, DeMoro noted.

Among highlights, under the new standards:

California hospitals are now required to have full-body protective suits, that meet the American Society for Testing and Materials F1670 standard for blood penetration, F1671 standard for viral penetration, that leave no skin exposed or unprotected, and that are available for all hospital staff providing care for a suspected or confirmed Ebola patient, employees cleaning contaminated areas, and staff assisting other employees with the removal of contaminated protective gear.

Hospitals must provide powered air-purifying respirators (PAPRs) with a full cowl or hood for optimal protection for the head, face and neck of any RN or other staff who provide care for a suspected or confirmed Ebola patient. Like the suits, this requirement extends to cleaning contaminated areas or assisting staff in removal of protective gear. Both these respirators and the suits have been a key NNU demand, and as Cal OSHA noted, the respiratory protection standards “go beyond the current (CDC) recommendations.”

Infection by the Ebola virus can occur not just through direct contact with droplets of bodily fluids, but even through aerosol transmission of fluids from coughing or other aerosol exposure with an Ebola patient.

Regular training is required for any staff who are at risk of exposure, including hands on practice in teams with the ability to interact and ask questions. Computer based training does not meet the requirement.

Employees who report hospitals that violate the regulations are protected from retaliation by their employers with whistleblower protection.