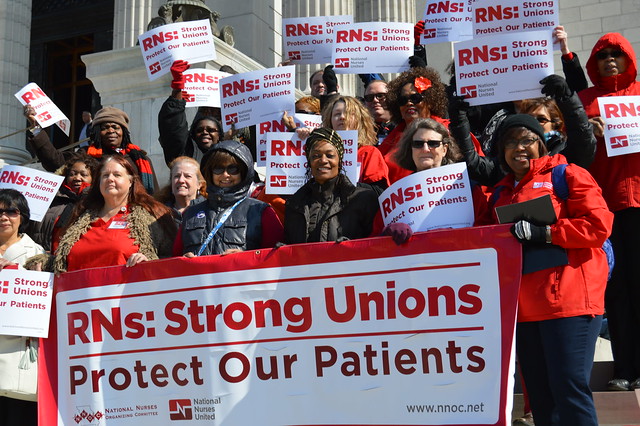 Silver Spring, Maryland–(ENEWSPF)–June 30, 2015.  Today’s decision by the U.S. Supreme Court to grant review of a case challenging the survival of public sector unions poses a significant threat to public health and safety and quality of life, warned National Nurses United, the largest U.S. organization of nurses.

The Court agreed to review and act on an appeal of a Court of Appeals decision in its next session beginning in October. The case, Friedrichs v. CTA, involves a challenge supported by far right anti-union groups to the right of public unions to require all members who receive the benefits of representation, including higher wages and benefits, to pay union dues – with the ability to withhold payment for certain union political activity.

But the case goes far beyond permitting union members to opt out of dues for politics, going directly to the heart of everything the union does in the realm of collective bargaining.

If the Supreme Court overturns the decision of the 9th Circuit Court of Appeals public sector unions could be barred from requiring any dues payments from any members even while still being mandated, at considerable cost, to represent all members in bargaining for wages, health benefits, and other conditions of employment – in effect subsidizing free riders, says NNU.

That’s a considerable risk now that the Court has agreed to take up and rule on Friedrichs v. CTA. A decision on the case would come later in 2015 or in 2016.

“The intended effect,” warns NNU Co-President Jean Ross, RN, “is to essentially bankrupt public sector unions, including many nurse unions that advocate for patient safety, by allowing members to enjoy all the privileges of union representation, including wage increases, health coverage, pensions upon their retirement, and improved working conditions, while avoiding any financial responsibility to help support the work done by their union on their behalf.”

“The architects of this move are the management-linked groups, funded by some of the wealthiest corporate interests in the U.S. whose goal is to eliminate the ability of workers to have a voice in the workplace or limit the ability of corporations to put profits ahead of worker rights, workplace rights, and in the case of nurses, patient health and safety,” Ross said.

Friedrichs v. CTA parallels the so-called “right to work” campaign by similar far right groups that have targeted unions in the private sector, and should be seen in the context of the broader attack on unions and worker’s rights that have resulted in a decline in union membership, stagnant wages for most workers, declining relative living standards, and a massive gap in income inequality, notes NNU.

Nurses are especially concerned with the impact of right-to-work laws on public health.

Weaker unions – the goal of anti-union groups from the Koch Brothers to corporate linked management law firms and consultants – also reduces the ability of workers through collective action to protect the public, and their own health and safety. For example, the rate of workplace deaths is 54 percent higher in right-to-work states, according to Bureau of Labor Statistics data surveyed by the AFL-CIO.

“For nurses, weakened unions, whether in the public or private sector, means less ability to speak out against unsafe patient care conditions to employers or public agencies, exposing more patients to the risk of death or other health complications in a healthcare industry increasingly dominated by big corporate chains that put their profits and budget goals ahead of patient protections,” Ross said.

Action on Friedrichs v. CTA comes after two other recent cases, Harris v. Quinn and Knox v. Service Employees International Union, Local 1000, in which the Court began to rollback the rights of public unions and public workers. Those were likely test rulings for a broader decision that could come with Friedrichs v. CTA.

If the Court does overturn the Appeals Court ruling  it would be reversing four decades of settled case law, notes NNU, going back to a case known as Abood v. Detroit Board of Education in 1977 in which the court firmly set in place the current system permitting individual workers to choose to opt out of dues payments for political activity, such as union spending on elections or candidates.

“Sadly, as this Court has demonstrated over and over, most notably in Citizens United and other court cases putting limits on corporate spending on elections, precedent has meant little on a Court dominated by conservative activists. For our patients and the public interest, let’s hope that is not repeated with Friedrichs v. CTA,” Ross concluded.