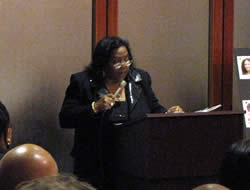 University Park, IL–(ENEWSPF)– Dr. Marvel McCain Parker issued a challenge Saturday night to the League of Women Voters of the Park Forest Area, urging members to "become advocates for HIV/AIDS prevention education in our schools, for our youth." Parker was guest speaker at the League’s 2010 Black and White Gala held at the University Golf Club and Conference Center in University Park.

Dr. Parker, a graduate of Harvard University Divinity School, is also founder and CEO of AIDS Awareness Advocacy Inc., an organization that focuses on behavioral intervention and prevention education and counseling.

"I would like to challenge each of you lovely women, members of the League of Women Voters of the Park Forest Area, in your pursuit to influence policy through advocacy, in your support of President Obama’s health reform bill, that you would consider another area of advocacy, and that is the advocacy of HIV/AIDS prevention education in our schools, for our youth. Especially our African American youth who are disproportionately affected by HIV/AIDS, sexually transmitted diseases, and unintended pregnancy. The African American rate of HIV/AIDS infection is five times higher than that of caucasians. AIDS is the fourth leading cause of death among African Americans age 25 to 44. This group is likely to have contracted the disease during their adolescence.

"When I was invited to address this group by my friend Sharon, Sharon told me this group would probably not want to hear about AIDS. My response was, ‘That’s okay, because nobody wants to hear about AIDS.’ Nobody wants to talk about it, and that’s why our children are the highest number of new incidences with this disease. Whenever I’m invited to speak, whether it’s a Sunday morning service or a black-and-white gala for the League of Women Voters, I’m breaking the silence about this pandemic."

Parker reflected on the movie Precious, "I don’t know about you, but it was a rather depressing story to me. We see a young child of two years old being forced to have sex with her biological father, an abusive mother that not only allows this abuse, but participates. She has a child by her father at 12, another at 16, she is illiterate, and ends up being HIV-positive." Parker stressed that was the way the book ended, not the book.

"What I want to know is what did this movie do to prick the conscience of the black community? This is a horrible depicting of the black family. Did it raise our conscience to become proactive in the prevention of sexual abuse of our little black girls? Did it cause us to want to do something to stop the spread of HIV/AIDS in the African American community?

"Are we now ready to talk about what’s happening in our community?" Parker asked. "Are we ready to break the silence?"

Parker shared some sobering statistics, saying that 50% of the African American students in five south side Chicago high schools are HIV positive. There were several audible reactions to this statistic from those in attendance.

"Let’s talk about from January 2009 to December 2009, African Americans represented 55% of the 20,000 cases of chlamydia in the state of Illinois, 75% of the cases of gonorrhea." Again, there were audible gasps from those listening.

"So, now that we’ve talked about it, let’s do something. I know these statistics are alarming to you as they are to me. I know that the League of Women Voters, that your legislative priorities change to reflect the needs of society and critical issues of concern," she said.

"I implore you to make HIV/AIDS education a critical issue of concern," Dr. Parker challenged the group. "HIV/AIDS education is not mandatory in the state of Illinois. We need to change that. We need this behavioral education in our schools. If it’s not taught in the schools, and we don’t talk about it at home, and its not mentioned at church, where will our children learn to develop health lifestyles? How will they understand the dangers of risky behavior? How will the next little Precious that the behavior of her father and her mother is not normal, and that there are people out there that will help get her out of that situation?"

"Your web site states that the League of Women Voters is a non-partisan political organization and has fought since 1920 to improve our system of government and impact public policies through citizen education and advocacy. Yes, this is just the organization that will really change the consciousness of America through advocacy and public policy," Dr. Parker said.

The League also presented awards to its 2010 Essay Contest winners, Leslie Elizabeth Garrett, Christina Gray, Montel Murry, and Ra’Jean Randle. The awards and speaker followed rather lengthy introductions of the speakers, read from material which had already been distributed to those in attendance.

The League of Women Voters of the Park Forest Area is a nonpartisan political education and action organization welcoming all women and men interested in promoting responsible government at any level.