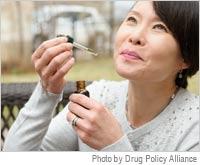 London, United Kingdom–(ENEWSPF)–June 8, 2017.  The administration of whole-plant cannabis extracts is associated with improvements in cognition and behavior in subjects with Attention Deficit Hyperactivity Disorder (ADHD), according to clinical trial data published online ahead of print in the journal European Neuropsychopharmacology.

British scientists conducted a randomized, placebo-controlled trial evaluating the efficacy of cannabis extracts in 30 adults with ADHD. Treatment was associated “with a nominally significant improvement in hyperactivity/impulsivity and a trend for improvement in inattention. There were further indications for improvement in activity and cognitive performance, and emotional lability.”

Investigators concluded: “ADHD may represent a subgroup of individuals that gain cognitive enhancement and reduction of ADHD symptoms from the use of cannabinoids. These findings provide preliminary evidence using an experimental design for the self-medication hypothesis of cannabis use in ADHD; and support the need for further research into the effects of cannabinoids on ADHD symptoms and impairments.”

Full text of the study, “Cannabinoids in attention-deficit/hyperactivity disorder: a randomised-controlled trial,” appears in European Neuropsychopharmacology.