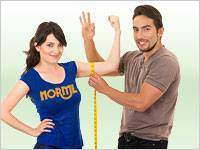 Portland, OR–(ENEWSPF)–March 23, 2017. Those subjects who consume cannabis more than five times per month possess, on average, lower body mass index (BMI) than do those who do not use the substance, according to data published online ahead of print in the journal Archives of Osteoporosis.

Researchers at Oregon’s Health and Science University assessed the relationship between cannabis use and a variety of health outcomes in a nationally representative sample of 4,743 participants between the ages of 20 and 59.

Authors reported, “Heavy users of cannabis had a lower mean BMI compared to that of never users, with a mean BMI being 26.7 kg/m in heavy users and 28.4 kg/m in never users.” The finding is consistent with those of prior reviews, such as those here and here.

Investigators reported no relationship between cannabis use prevalence and changes in bone mineral density of the hip or spine. In preclinical models, cannabinoid administration has been associated with bone-stimulating effects.

Full text of the study, “Cannabis use and bone mineral density: NHANES 2007-2010,” appears in Archives of Osteoporosis.