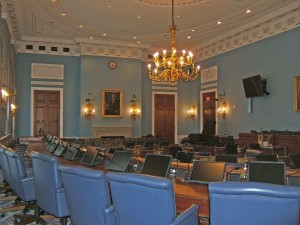 “This is the first time in 10 years we’ve had a hearing on biotech. I guess we’re a little late, but we’re here,” said chair of the committee, Senator Pat Roberts (R-KS). The ranking minority member of the committee, Senator Debbie Stabenow (D-MI) said, “Biotechnology is proven to be safe, beneficial, and I believe will play a major role in helping to solve these dual global challenges of climate change and global food security,”

Central to the hearing is the the issue of labeling food products containing GE crops. Senator Stabenow called for the adoption of legislation on GE food labeling, presumably with language that will preempt the authority of states to adopt more stringent labeling standards. Senator Stabenow said that she wants labeling that “doesn’t stigmatize biotechnology.” The GE food industry is urging Congress to act to override state labeling before the Vermont label law goes into effect in July 2016.

The committee heard government and industry witnesses on the federal regulation of agriculture biotechnology, with limited input from consumer critics. Two panels (one representing agencies, the other industry) received questions from the 20 committee members on GE crops, biotechnology, and labeling. The agency panel represented “business as usual,” discussing administrative procedures at length, while the industry panel stressed the science of GE. The Just Label It group, a coalition of organizations advancing labeling, called for the public’s right to know. Environmental groups not invited to testify criticized the lopsided hearing and the government’s opposition to GE labeling of food.

While Senators spent two of the three hours questioning agency officials on their regulatory procedures of GE crops and biotechnology, no answers were given that address scientific studies needed to ensure their safety. When asked by Senator John Hoeven (R-ND) if there was anything that made GE crops harmful to the environment, all of the members of the regulatory panel said “no,” despite impacts of GE crop production on the environment, reliance on hazardous weed killers in herbicide-tolerant crops, and the associated decline of monarch butterflies.

EPA’s Office of Pesticide Program indicated that it registers “plant incorporated protectants” (PIPs) in 86 GE crops and acknowledged pest resistance problems. Insects that are the target of the engineered plant, incorporated with a pesticide, develop resistance, putting farmers’ crops at risk because of their dependency on the technology. Organic agriculture identifies genetic engineering as an “excluded method” and prohibits its use in certified organic production. As the GE technology advances, farmers are increasingly threatened with crop loss, as was the argument made by Texas cotton farmers last year when 3 million acres of GE cotton was threatened by weed resistance to Monsanto’s herbicide-tolerant Roundup. The state of Texas, on behalf of the farmers, requested that EPA allow the use of a triazine herbicide not registered for use on cotton under an emergency exemption (Section 18 of the Federal Insecticide, Fungicide and Rodenticide Act), but EPA denied the request because it said that exposure to triazines, linked to hermaphroditism in frogs, “already show[s] unacceptable risk levels.”

In 2012, Washington State University researcher Charles Benbrook, Ph.D. found that the use of herbicides in the production of three genetically engineered herbicide-tolerant crops (cotton, soybeans and corn) has increased, contrary to industry claims that biotechnology will reduce pesticide applications. According to a series of studies in the journal Weed Science, at least 21 different species of weeds Monsanto’s “Roundup-Ready” crops, which leads to an increased pesticide use to try to combat resistance, escalating the pesticide treadmill effect. The latest herbicide tolerant GE corn and soybean plants are engineered to be used with the herbicide 2,4-D, one-half of the mixture of Agent Orange and linked to non Hodgkins lymphoma. Experts expect increased public exposure to 2,4-D through the food supply and in the environment, leading to weed resistance.

At the Agriculture Committee hearing, the first panel included of officials from the Environmental Protection Agency (EPA), Animal and Plant Health Inspection Service (APHIS) of the U.S. Department of Agriculture (USDA), and Food and Drug Administration (FDA). The Center for Food Safety and FDA’s Director of Applied Nutrition, Susan Mayne, Ph.D., took opposing positions on GE labeling with the government witness arguing that mandatory labeling is unnecessary because the Federal Food, Drug, and Cosmetic Act (FFDCA) does not recognize a “material” difference between GE and conventional crops. Senator Patrick Leahy (D-VT), a long-time member of the committee, cited the U.S. Patent and Trademark Office’s interpretation of GE crops as “novel for patent purposes” and asked the panel why agencies were in disagreement about the differences between GE and conventional crops. Dr. Mayne responded that, if there were a material difference in the food safety and nutrition between GE and conventional crops, FDA would support labeling.

The second panel consisted of five members of the agricultural, production, and consumer industry. Joanna Lidback, producer and farmer from the Farm at Wheeler Mountain, voiced her concerns about the costs associated with GE crops used to feed her dairy cows. She calculated an increase of $48,000 per year on her farm if GE feed was ever banned, but no calculations for the costs of the proposed GE label. With economic hardships in mind, organic farmers are threatened with adverse economic impact due to the contamination from GE pollen drifting onto their crops. Organic farmers also report losses due to a need to establish buffer zones.

Opponents of mandatory GE labeling on both panels cited the growing concern of global food insecurity as a reason for denying consumers the right to know if GE crops are in their food. While the developing world is facing a food crisis, most GE crops are used as animal feed, with only 12 percent of crop calories used in that feed end up as calories consumed by humans. Gary Hirshberg, co-founder of Stonyfield Farm and chairman of Just Label It, addressed these concerns. He pointed to other nations that, unlike the U.S., have experience with GE labeling laws. He stated that crop acreage across the GE-labeling world has increased, and asked the Senators to recognize that existing experience has shown that post-labeling trends lean toward increased profit.

Though Senator Heidi Heitkamp (D-ND) pointed to the “unanimity” among regulatory bodies’ belief that GE crops are safe and well-regulated, and expressed confidence in agency oversight, recent violations and deficiencies by regulators paint a different story. On August 10, U.S. Court of Appeals Judge for the Ninth Circuit, M. Margaret McKeown, responded to EPA’s lack of attention to the toxic insecticide dursban (chlorpyrifos), stating that federal agencies should never practice the “venerable tradition” of putting off statutory requirements when it comes to human health. Just one month later, that court unequivocally rejected the U.S. Environmental Protection Agency’s (EPA) unconditional registration of the systemic and bee-toxic pesticide sulfoxaflor. Similarly, federal judge in the U.S. District Court for the Northern District of California, in a bench ruling, rejected the U.S. Department of Agriculture’s (USDA) motion to dismiss a federal lawsuit (Case3:15-cv-01690) that challenges the National Organic Program’s (NOP) failure to follow proper legal procedures in making a substantial rule change to the organic standard.

Although absent from the hearing discussion,  GE crops present serious public health and environmental concerns, specifically when it comes to the high levels of chemicals such as glyphosate  (Roundup), recently classified as a carcinogen by the International Agency for Research on Cancer (IARC). The increasing use of toxic pesticides in GE crop production elevates public exposure through the food supply and environmental contamination.

In July, the U.S. House of Representatives passed the Safe and Accurate Food Labeling Act (H.R. 1599), commonly referred to as the Deny Americans the Right to Know (DARK) Act. After passing the bill, H.R. 1599 was sent to the Senate for review by applicable committees. The act will, if passed, preempt individual states’ rights to require GE labeling. Yesterday’s hearing indicates the rapid movement of the bill through congress and the upcoming Senate bill. Vermont was the first state in the nation to pass a GE labeling law and then survive a federal court challenge from the food industry. If the DARK Act passes through Senate and is enacted into law, it will nullify Vermont’s recent law, set to go into effect on July 1, 2016. Beyond Pesticides encourages people to communicate your  concerns about GE food and the right to know what’s in your food to your U.S. Senators .

Take Action:
Take part by writing to your Senators today to tell them to support federally mandated GE labeling.

You can learn more about the reasons to say no to genetically engineered crops and food by reading Beyond Pesticides’ factsheet on the subject or visiting the Genetic Engineering page on our website.