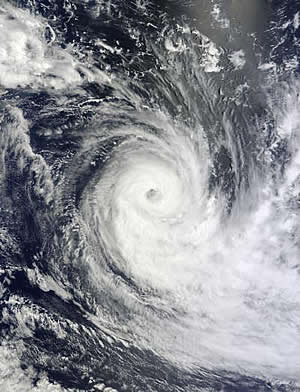 The Atmospheric Infrared Sounder (AIRS) instrument that flies aboard NASA’s Aqua satellite captured an infrared image of Cyclone Gino on Feb. 12 at 1935 UTC (2:35 p.m. EST). The AIRS temperature data showed Gino maintained a large area of powerful thunderstorms with cold cloud top temperatures and a band of strong thunderstorms wrapping in from the southeast. Cloud top temperatures in both of those areas were as cold as -63 Fahrenheit (-52 Celsius), and are an indication of heavy rainfall. AIRS data during the early morning hours of Feb. 13 indicated cloud top temperatures have warmed slightly, and convection around Gino’s center has weakened a little.

At 0505 UTC (12:05 a.m. EST) on Feb. 13 the Moderate Resolution Imaging Spectroradiometer (MODIS) instrument that flies aboard NASA’s Terra satellite captured a visible image of Gino. The image clearly showed the ocean surface down through the middle of Gino’s ragged eye. According to the Joint Typhoon Warning Center, microwave satellite imagery indicated that the eye is weakening on both low- and mid-levels.

Gino continues to head into cooler sea surface temperatures. An approaching trough, or elongated area of low pressure is expected to increase wind shear. Those two factors will adversely affect Gino over the next couple of days.