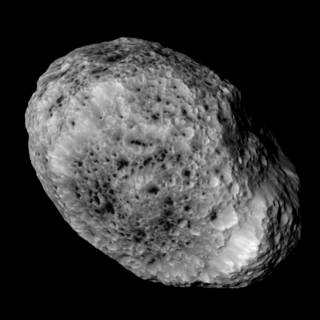 Washington, DC–(ENEWSPF)–June 2, 2015.  NASA’s Cassini spacecraft has returned images from its final close approach to Saturn’s oddball moon Hyperion, upholding the moon’s reputation as one of the most bizarre objects in the solar system. The views show Hyperion’s deeply impact-scarred surface, with many craters displaying dark material on their floors.

Raw, unprocessed images from the May 31 flyby are available via the Cassini mission website at: http://saturn.jpl.nasa.gov/photos/raw

A selection of some of the images is also available from the Cassini imaging team’s website at: http://www.ciclops.org/view_event/208/HYPERION-REV-216-RAW-PREVIEW

Hyperion is the largest of Saturn’s irregular, or potato-shaped, moons and may be the remnant of a violent collision that shattered a larger object into pieces. Cassini scientists attribute Hyperion’s peculiar, sponge-like appearance to the fact that it has an unusually low density for such a large object — about half that of water. Its low density indicates Hyperion is quite porous, with weak surface gravity. These characteristics mean impactors tend to compress the surface, rather than excavating it, and most material that is blown off the surface never returns.

Cassini will make several more close flybys of Saturn’s moons this year before departing the planet’s equatorial plane to begin a year-long setup of the mission’s daring final act. For its grand finale, set for 2017, Cassini will repeatedly dive through the space between Saturn and its rings.

The Cassini-Huygens mission is a cooperative project of NASA, ESA (European Space Agency) and the Italian Space Agency. NASA’s Jet Propulsion Laboratory in Pasadena, California, manages the mission for the agency’s Science Mission Directorate in Washington. The Cassini imaging operations center is based at the Space Science Institute in Boulder, Colorado. The California Institute of Technology in Pasadena manages JPL for NASA.