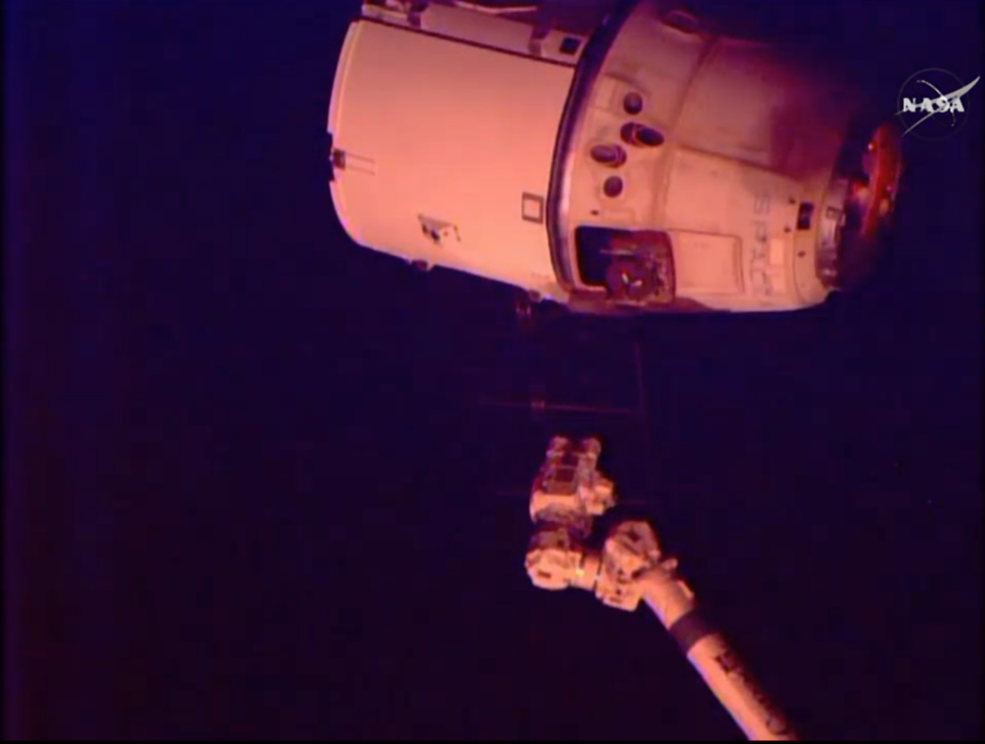 The SpaceX Dragon cargo spacecraft was released from the International Space Station’s robotic arm at 7:04 a.m. EDT Thursday. The capsule then performed a series of departure burns and maneuvers to move beyond the 656-foot (200-meter) “keep out sphere” around the station and begin its return trip to Earth.

Washington, DC–(ENEWSPF)–May 21, 2015.  SpaceX’s Dragon cargo spacecraft splashed down in the Pacific Ocean at 12:42 p.m. EDT Thursday with almost 3,100 pounds of NASA cargo from the International Space Station, including research on how spaceflight and microgravity affect the aging process and bone health.

Dragon is the only space station resupply spacecraft able to return a significant amount of cargo to Earth. It is the U.S. company’s sixth NASA-contracted commercial resupply mission to the station and carried more than two tons of supplies and scientific cargo when it lifted off from Cape Canaveral Air Force Station in Florida on April 14. NASA also has contracted with American companies SpaceX and Boeing to develop their Crew Dragon and CST-100, respectively, to once again transport astronauts to and from the orbiting laboratory from the United States in 2017.

The returning Space Aging study, for example, examines the effects of spaceflight on the aging of roundworms, widely used as a model for larger organisms. By growing millimeter-long roundworms on the space station, researchers can observe physiological changes that may affect the rate at which organisms age. This can be applied to changes observed in astronauts, as well, particularly in developing countermeasures before long-duration missions.

“Spaceflight-induced health changes, such as decreases in muscle and bone mass, are a major challenge facing our astronauts,” said Julie Robinson, NASA’s chief scientist for the International Space Station Program Office at NASA’s Johnson Space Center in Houston. “We investigate solutions on the station not only to keep astronauts healthy as the agency considers longer space exploration missions but also to help those on Earth who have limited activity as a result of aging or illness.”

Also returned on Dragon were samples for the Osteocytes and Mechanomechano-transduction (Osteo-4) investigation. Researchers with Osteo-4 will observe the effects of microgravity on the function of osteocytes, the most common cells in bone. Understanding the effects of microgravity on osteocytes will be critical as astronauts plan for future missions that require longer exposure to microgravity, including the NASA’s journey to Mars. The results derived from this study also could have implications on Earth for patients suffering bone disorders related to disuse or immobilization, as well as metabolic diseases such as osteoporosis.

Equipment and data from the Special Purpose Inexpensive Satellite (SpinSat) investigation also made the trip back to Earth. The SpinSat study tested how a spherical satellite, measuring 22 inches in diameter, moves and positions itself in space using new thruster technology. Researchers can use high-resolution atmospheric data captured by SpinSat to determine the density of the thermosphere, one of the uppermost layers of the atmosphere. With better knowledge of the thermosphere, engineers and scientists can refine satellite and telecommunications technology.

The Dragon will be transported by ship approximately 155 miles northeast of its splashdown location to Long Beach, California where NASA cargo will be removed and returned to the agency. The spacecraft then will be prepared for its trip to SpaceX’s test facility in McGregor, Texas, for processing.

The International Space Station is a convergence of science, technology and human innovation that enables us to demonstrate new technologies and make research breakthroughs not possible on Earth. It has been continuously occupied since November 2000 and, since then, has been visited by more than 200 people and a variety of international and commercial spacecraft. The ISS remains the springboard to NASA’s next giant leap in exploration, including future missions to an asteroid and Mars.

For more information about the International Space Station, visit:  http://www.nasa.gov/station

For more information about SpaceX’s mission to the International Space Station, visit:  http://www.nasa.gov/spacex