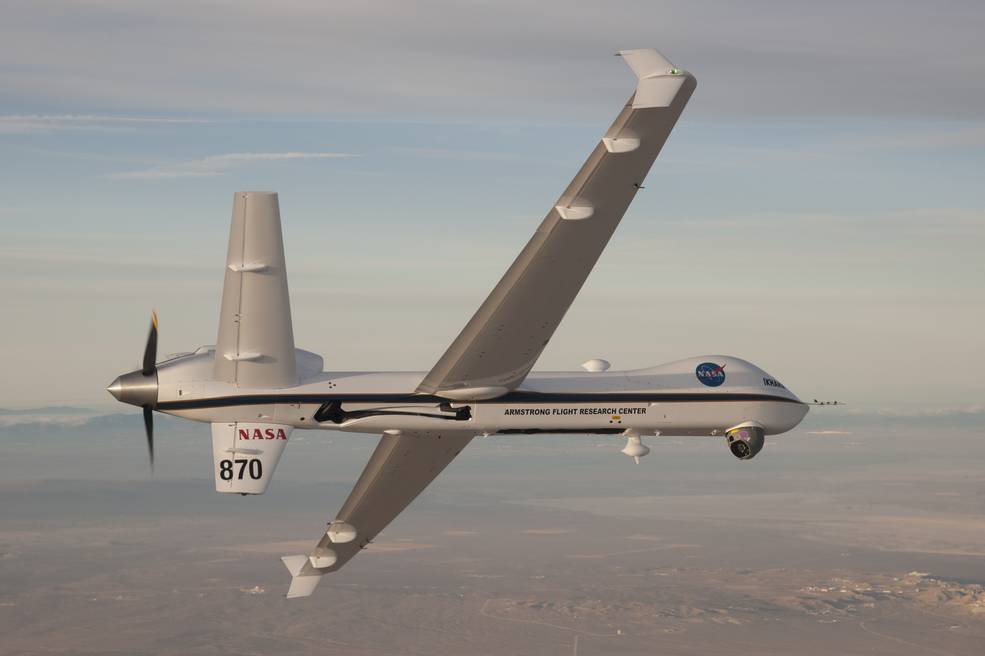 NASA’s Ikhana is being used to test a system that will allow uncrewed aircraft to fly routine operations within the National Airspace System. Credits: NASA

Washington, DC–(ENEWSPF)–June 23, 2015.  NASA, working with government and industry partners, is testing a system that would make it possible for unmanned aircraft to fly routine operations in United States airspace.

Through the agency’s Unmanned Aircraft Systems Integration in the National Airspace System (UAS-NAS) project, NASA, the Federal Aviation Administration (FAA), General Atomics Aeronautical Systems, Inc. (GA-ASI) and Honeywell International, Inc., are flying a series of tests which began on June 17 and will run through July at NASA’s Armstrong Flight Research Center in California.

“We are excited to continue our partnership with GA-ASI and Honeywell to collect flight test data that will aid in the development of standards necessary to safely integrate these aircraft into the National Airspace System,” said Laurie Grindle, UAS-NAS project manager at Armstrong.

This is the third series of tests that builds upon the success of similar experiments conducted late last year that demonstrated a proof-of-concept sense-and-avoid system. The tests engage the core air traffic infrastructure and supporting software components through a live and virtual environment to demonstrate how an autonomous aircraft interacts with air traffic controllers and other air traffic.

“This is the first time that we are flight testing all of the technology developments from the project at the same time,” Grindle said.

This series of tests is made up of two phases. The first is focused on validation of sensor, trajectory and other simulation models using live data. Some of the tests will be flown with an Ikhana aircraft, based at Armstrong, that has been equipped with an updated sense-and-avoid system. The system includes a new traffic collision avoidance program and other advanced software from Honeywell.

Other tests will involve an S-3B plane from NASA’s Glenn Research Center in Cleveland, serving as a high-speed piloted surrogate aircraft. Both tests will use other aircraft following scripted flight paths to intrude on the flight path the autonomous craft is flying, prompting it to either issue an alert or maneuver out of the other aircraft’s path. These flights will also conduct the first full test of an automatic collision avoidance capability on autonomous aircraft.

During the June 17 test, which lasted a little more than five hours, the team accomplished 14 encounters using the Ikhana aircraft and a Honeywell-owned Beech C90 King Air acting as the intruder. A second test was flown the following day, with a total of 23 encounters. The project team plans to fly more than 200 encounters throughout the first phase of the test series.

“Our researchers and project engineers will be gathering a substantial amount of data to validate their pilot maneuver guidance and alerting logic that has previously been evaluated in simulations,” said Heather Maliska, Armstrong’s UAS-NAS deputy project manager.

The second phase of the third test series will begin in August and will include a T-34 plane equipped with a proof-of concept control and non-payload communications system. It will evaluate how well the systems work together so that the aircraft pilots itself, interacts with air traffic controllers and remains well clear of other aircraft while executing its operational mission. The aircraft, which will have an onboard safety pilot, will fly an operationally representative mission in a virtual airspace sector complete with air traffic control and live and virtual traffic.