This animation of the dwarf planet Ceres was made by combining images taken by NASA’s Dawn spacecraft on Jan. 25. The spacecraft’s framing camera took these images, at a distance of about 147,000 miles (237,000 kilometers) from Ceres, and they represent the highest-resolution views to date of the dwarf planet. Image Credit: NASA/JPL

Washington, DC–(ENEWSPF)–January 27, 2015.  NASA’s Dawn spacecraft has returned the sharpest images ever seen of the dwarf planet Ceres. The images were taken 147,000 miles (237,000 kilometers) from Ceres on Jan. 25, and represent a new milestone for a spacecraft that soon will become the first human-made probe to visit a dwarf planet.

“We know so little about our vast solar system, but thanks to economical missions like Dawn, those mysteries are being solved,” said Jim Green, Planetary Science Division Director at NASA Headquarters in Washington.

At 43 pixels wide, the new images are more than 30 percent higher in resolution than those taken by NASA’s Hubble Space Telescope in 2003 and 2004 at a distance of over 150 million miles. The resolution is higher because Dawn is traveling through the solar system to Ceres, while Hubble remains fixed in Earth orbit. The new Dawn images come on the heels of initial navigation images taken Jan. 13 that reveal a white spot on the dwarf planet and the suggestion of craters. Hubble images also had glimpsed a white spot on the dwarf planet, but its nature is still unknown. 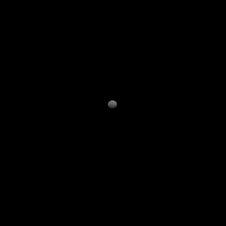 Zoomed out — PIA19173 Ceres appears sharper than ever at 43 pixels across, a higher resolution than images of Ceres taken by the NASA’s Hubble Space Telescope in 2003 and 2004. Image Credit: NASA/JPL

“Ceres is a ‘planet’ that you’ve probably never heard of,” said Robert Mase, Dawn project manager at NASA’s Jet Propulsion Laboratory (JPL) in Pasadena, California. “We’re excited to learn all about it with Dawn and share our discoveries with the world.”

As the spacecraft gets closer to Ceres, its camera will return even better images. On March 6, Dawn will enter into orbit around Ceres to capture detailed images and measure variations in light reflected from Ceres, which should reveal the planet’s surface composition.

“We are already seeing areas and details on Ceres popping out that had not been seen before. For instance, there are several dark features in the southern hemisphere that might be craters within a region that is darker overall,” said Carol Raymond, deputy principal investigator of the Dawn mission at JPL. “Data from this mission will revolutionize our understanding of this unique body. Ceres is showing us tantalizing features that are whetting our appetite for the detailed exploration to come.”

Ceres, the largest body between Mars and Jupiter in the main asteroid belt, has a diameter of about 590 miles (950 kilometers). Some scientists believe the dwarf planet harbored a subsurface ocean in the past and liquid water may still be lurking under its icy mantle.

Originally described as a planet, Ceres was later categorized as an asteroid, and then reclassified as a dwarf planet in 2006. The mysterious world was discovered in 1801 by astronomer Giuseppe Piazzi, who named the object for the Roman goddess of agriculture, grain crops, fertility and motherly relationships

“You may not realize that the word ‘cereal’ comes from the name Ceres. Perhaps you already connected with the dwarf planet at breakfast today,” said JPL’s Marc Rayman, Mission Director and Chief Engineer of the Dawn mission.

Powered by a uniquely capable ion propulsion system, Dawn also orbited and explored Vesta, the second most massive body in the asteroid belt. From 2011 to 2012, Dawn returned more than 30,000 images, 18 million light measurements and other scientific data about the impressive large asteroid. Vesta has a diameter of about 326 miles (525 kilometers).

“With the help of Dawn and other missions, we are continually adding to our understanding of how the solar system began and how the planets were formed,” said Chris Russell, principal investigator for the Dawn mission, based at the University of California, Los Angeles.

Dawn’s mission to Vesta and Ceres is managed by JPL for NASA’s Science Mission Directorate in Washington. Dawn is a project of the directorate’s Discovery Program, managed by NASA’s Marshall Space Flight Center in Huntsville, Alabama. UCLA is responsible for overall Dawn mission science. Orbital Sciences Corp. of Dulles, Virginia, designed and built the spacecraft. JPL is managed for NASA by the California Institute of Technology in Pasadena.

The framing cameras were provided by the Max Planck Institute for Solar System Research in Gottingen, Germany, with significant contributions by the German Aerospace Center (DLR) Institute of Planetary Research in Berlin, and in coordination with the Institute of Computer and Communication Network Engineering in Braunschweig.

The new Dawn images are available online at:  http://go.nasa.gov/1wyp0LA

To view the images taken by Hubble, visit:  http://go.nasa.gov/1Ju41mf

More information about Dawn is available online at:  http://www.nasa.gov/dawn