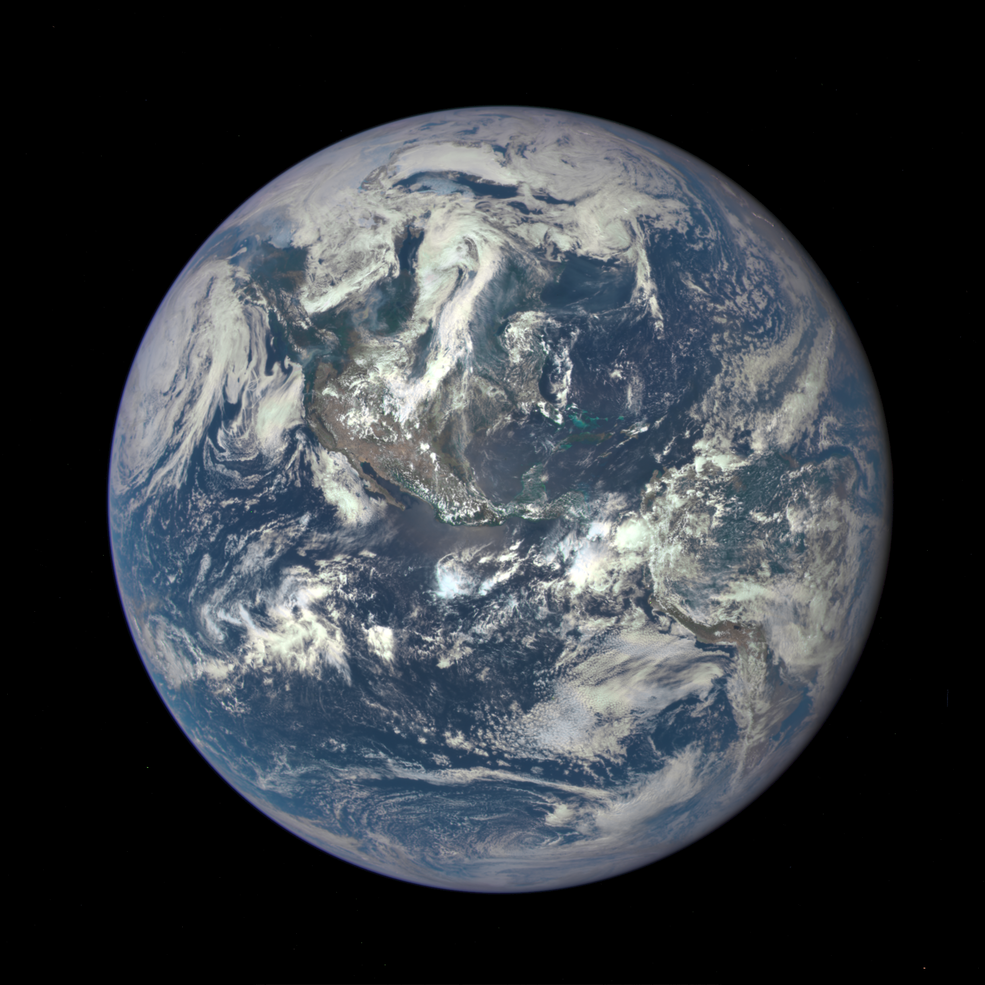 Earth as seen on July 6, 2015 from a distance of one million miles by a NASA scientific camera aboard the Deep Space Climate Observatory spacecraft.  Credits: NASA

Washington, DC–(ENEWSPF)–July 20, 2015.  A NASA camera on the Deep Space Climate Observatory (DSCOVR) satellite has returned its first view of the entire sunlit side of Earth from one million miles away.

The color images of Earth from NASA’s Earth Polychromatic Imaging Camera (EPIC) are generated by combining three separate images to create a photographic-quality image. The camera takes a series of 10 images using different narrowband filters — from ultraviolet to near infrared — to produce a variety of science products. The red, green and blue channel images are used in these Earth images.

“This first DSCOVR image of our planet demonstrates the unique and important benefits of Earth observation from space,” said NASA Administrator Charlie Bolden. “As a former astronaut who’s been privileged to view the Earth from orbit, I want everyone to be able to see and appreciate our planet as an integrated, interacting system. DSCOVR’s observations of Earth, as well as its measurements and early warnings of space weather events caused by the sun, will help every person to monitor the ever-changing Earth, and to understand how our planet fits into its neighborhood in the solar system.”

These initial Earth images show the effects of sunlight scattered by air molecules, giving the images a characteristic bluish tint. The EPIC team now is working on a rendering of these images that emphasizes land features and removes this atmospheric effect. Once the instrument begins regular data acquisition, new images will be available every day, 12 to 36 hours after they are acquired by EPIC. These images will be posted to a dedicated web page by September.

“The high quality of the EPIC images exceeded all of our expectations in resolution,” said Adam Szabo, DSCOVR project scientist at NASA’s Goddard Space Flight Center in Greenbelt, Maryland. “The images clearly show desert sand structures, river systems and complex cloud patterns. There will be a huge wealth of new data for scientists to explore.”

The primary objective of DSCOVR, a partnership between NASA, the National Oceanic and Atmospheric Administration (NOAA) and the U.S. Air Force, is to maintain the nation’s real-time solar wind monitoring capabilities, which are critical to the accuracy and lead time of space weather alerts and forecasts from NOAA.

“These new views of the Earth, a result of the great partnership between NOAA, the U.S. Air Force, and NASA, give us an important perspective of the true global nature of our spaceship Earth,” said John Grunsfeld, associate administrator of the Science Mission Directorate at NASA Headquarters in Washington.

The satellite was launched in February and recently reached its planned orbit at the first Lagrange point or L1, about one million miles from Earth toward the sun. It’s from that unique vantage point that the EPIC instrument is acquiring science quality images of the entire sunlit face of Earth.  Data from EPIC will be used to measure ozone and aerosol levels in Earth’s atmosphere, cloud height, vegetation properties and the ultraviolet reflectivity of Earth. NASA will use this data for a number of Earth science applications, including dust and volcanic ash maps of the entire planet.

In addition to space weather instruments, DSCOVR carries a second NASA sensor — the National Institute of Science and Technology Advanced Radiometer (NISTAR). Data from the NASA science instruments will be processed at the agency’s DSCOVR Science Operations Center in Greenbelt, Maryland. This data will be archived and distributed by the Atmospheric Science Data Center at NASA’s Langley Research Center in Hampton, Virginia.

The Air Force provided the Space X Falcon 9 rocket for the mission. NOAA operates DSCOVR from its Satellite Operations Facility in Suitland, Maryland, and processes the space weather data at its Space Weather Prediction Center in Boulder, Colorado.

NASA uses the vantage point of space to increase our understanding of our home planet, improve lives, and safeguard our future. NASA develops new ways to observe and study Earth’s interconnected natural systems with long-term data records. The agency freely shares this unique knowledge and works with institutions around the world to gain new insights into how our planet is changing.