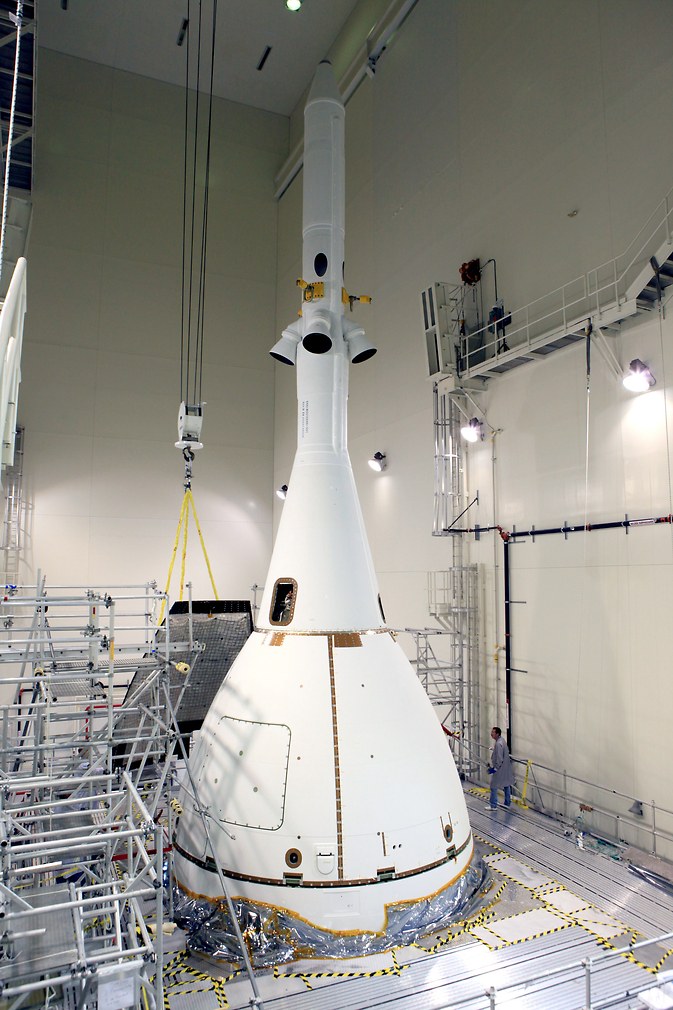 Inside the Launch Abort System Facility at NASA’s Kennedy Space Center in Florida, a crane brings the fourth and final Ogive panel closer for installation on Orion’s Launch Abort System. The panels will smooth the airflow over the conical spacecraft to limit sound and vibration.  Image Credit: NASA/Kim Shiflett

FLORIDA–(ENEWSPF)–November 4, 2014.  Kevin Rivers was nothing but giddy as he stood behind the closed door of the Launch Abort System Facility at NASA’s Kennedy Space Center in Florida, waiting to see the Orion spacecraft that will one day send humans on the journey to Mars. After just a few minutes that seemed like a lifetime, Rivers, the Launch Abort System project manager, walked through the facility door.

There before him stood the 80-foot high Orion spacecraft being readied for its December flight test with the four recently-installed protective panels that make up the Ogive. The Ogive reduces drag and acoustic load on the crew module, making it a smoother ride for the spacecraft.

“What my colleagues and I were able to witness was a significant historical point in our efforts to move beyond low-Earth orbit and explore past the moon,” Rivers said.

On Dec. 4, Orion is scheduled to launch atop a United Launch Alliance Delta IV Heavy rocket from Cape Canaveral Air Force Station’s Space Launch Complex 37 in Florida. During the test, Orion will travel 3,600 miles in altitude above Earth. 4 1/2 hours later, the spacecraft will reenter the atmosphere at 20,000 mph and splash down in the Pacific Ocean. Orion’s first flight will verify launch and high-speed reentry systems such as avionics, attitude control, parachutes and the heat shield.

Barry Meredith, who works with Rivers at NASA’s Langley Research Center in Virginia, expressed a similar awe. “Orion’s flight test is a major step toward exploring beyond low-Earth orbit,” he said. “Though a crew will not occupy the first flight, it’s really critical that we test the spacecraft systems.”

The Ogive installation was one of the last pieces of the puzzle for Orion prior to its move to the launch pad on Nov. 10. There, it will be lifted and attached to the rocket for its December launch.

“There is much effort and preparation for such a momentous occasion,” said Langley engineer Jose Ortiz. “There are many disciplines, geographically dispersed specialties and developments, tests, elaborate analyses, materials characterizations, and other efforts by NASA centers and contractor partners. The nationwide effort is aimed toward one common and challenging goal in mind: human spaceflight.”

Orion is managed out of NASA’s Johnson Space Flight Center in Texas, and the Launch Abort System project is managed out of Langley. NASA centers and industry partners from across the country have also played a critical role in the design, development and testing of Orion.