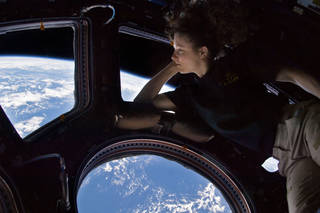 NASA astronaut Tracy Caldwell Dyson, an Expedition 24 flight engineer in 2010, took a moment during her space station mission to enjoy an unmatched view of home through a window in the Cupola of the International Space Station, the brilliant blue and white part of Earth glowing against the blackness of space.

Washington, DC–(ENEWSPF)–November 2, 2015.  The following is a statement from Dr. John Holdren, director of the White House Office of Science and Technology Policy:

“The International Space Station is a unique laboratory that has enabled groundbreaking research in the life and physical sciences and has provided a test bed for the technologies that will allow NASA to once again send astronauts beyond Earth’s orbit. The international partnership that built and maintains the Station is a shining example, moreover, of what humanity can accomplish when we work together in peace.

“I congratulate all of the men and women at NASA and around the world who have worked so hard to keep the International Space Station operational these past 15 years.  Everyone involved can be proud of this incredible achievement.”

The following is a statement from NASA Administrator Charles Bolden:

“Over the weekend, I called NASA astronaut Scott Kelly, who is currently halfway through his one-year mission aboard the International Space Station, to congratulate him on setting the American records for both cumulative and continuous days in space.

“I also took the opportunity to congratulate Commander Kelly — and the rest of the space station crew — for being part of a remarkable moment 5,478 days in the making: the 15th anniversary of continuous human presence aboard the space station.

“I believe the station should be considered the blueprint for peaceful global cooperation. For more than a decade and a half, it has taught us about what’s possible when tens of thousands of people across 15 countries collaborate to advance shared goals.

“The International Space Station, which President Obama has extended through 2024, is a testament to the ingenuity and boundless imagination of the human spirit. The work being done on board is an essential part of NASA’s journey to Mars, which will bring American astronauts to the Red Planet in the 2030s.

“For 15 years, humanity’s reach has extended beyond Earth’s atmosphere. Since 2000, human beings have been living continuously aboard the space station, where they have been working off-the-Earth for the benefit of Earth, advancing scientific knowledge, demonstrating new technologies, and making research breakthroughs that will enable long-duration human and robotic exploration into deep space.”

For more information about the International Space Station, visit: http://www.nasa.gov/station