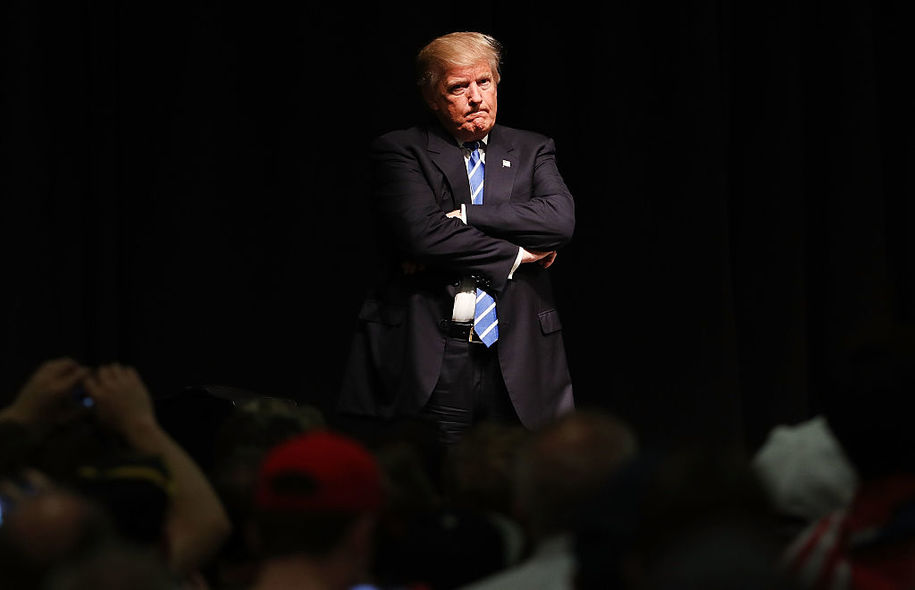 Donald Trump has just come off the worst week in modern political history—almost all of it self-inflicted. And what’s shocking about it is that nearly every individual part of it would have been campaign-ending in any other election, for any other candidate.

It started with a predictably terrible debate performance. This itself is not unusual or even unexpected; it seems the Trump campaign was being sincere when they claimed their candidate was not preparing for the debate, and so Trump came out onstage and happily proceeded to spend the evening being the worst version of himself, simultaneously belligerent and hopelessly uninformed. Clinton was easily able to get under his skin—and did so to the point that her reference to a former Miss Universe that Trump had demeaned became, for Trump, his own dominant campaign theme for the next week.

By Friday, the Republican nominee for the presidency of the United States was on wee-hours-of-the-morning Twitter to instruct Americans to “check out” her “sex tape.”

That was just the beginning.

• The New York Times was sent partial 1995 tax returns for Donald Trump showing that he had claimed nearly a billion dollars in business losses that year—a loss which probably reduced Trump’s federal tax bill to zero for nearly every year since.

• It was discovered that Trump’s company launched an effort to explore business opportunities in Cuba, in violation of U.S. laws supporting the Cuba embargo.

• It was discovered that Trump’s charitable foundation, already under scrutiny for using donor money to purchase items seemingly meant for Trump personally, had never obtained the proper state license for soliciting charitable donations. By this Monday, the New York attorney general’s office sent a cease and desist order requiring the foundation to stop all such solicitation efforts.

• It was discovered that Trump did business with an Iranian bank U.S. officials have charged with having ties to terrorism.

• Reports resurfaced of Trump’s loathsome treatment of female employees in his companies, including a lawsuit alleging he demanded women he deemed not attractive enough be fired and replaced with women who were. A new Associated Press report detailed equally grotesque behavior during Trump’s filming of The Apprentice.

• Papers across the nation broke against their own historical leanings to deny Trump their endorsements, including USA Today’s decision to weigh in on the presidential race for the first time in their history, in an editorial that called Trump unfit for the office.

Trump’s response to his own poor debate performance, as well as to the tax revelations, has been extraordinarily unhinged. A surrogate could make excuses for past business dealings; it is impossible to dismiss the candidate’s toxic rantings while he continues to ramp up those rantings by saying things that are even worse.

In addition to telling the American citizenry to check out a detractor’s “sex tape,” by Saturday night’s stump speech he launched into a mocking parody of his opponent’s bout with pneumonia, the declaration that “she could actually be crazy” and the accusation that “I don’t even think she’s loyal to Bill, if you want to know the truth.” It was an effort that had political observers bewildered and all-but-openly questioning the man’s sanity.

As if that were not enough, he also came forward with angry hints that he may or may not accept the results of the November election at all.

His surrogates have done him no favors. In response to reports of Trump’s billion-dollar business loss, campaign hangers-on Rudy Giuliani and Chris Christie both called him a “genius” for being able to reduce his tax burden so substantially. Repeatedly surrogates have intoned that references to Trump’s past sexism will now be met with references to Bill Clinton’s infidelities. And today the Republican Party approvingly tweeted out a report that they would be launching a “Willie Horton-Style Attack” on the Democrats, referencing a campaign commercial so race-baiting that even now it is referred to as prime example of the genre.

Of all these things, any one of about half of them could be considered campaign-ending in any other year. Other candidates have been dismembered in the press for having affairs or for tax errors involving their nannies; the Republican candidate this year is telling Americans to watch sex tapes, accusing his opponent of infidelity and has a charitable “foundation” so sketchy that it’s been given a cease and desist order for not being a licensed charity at all.

This is no longer just grading on a curve. This is lunacy. If it were discovered that the Clinton Foundation didn’t even have the proper documents to solicit charitable contributions the sea of reporters crashing against her campaign headquarters would reach the third-floor windows. The man has proven himself plainly unfit for the presidency in a half-dozen different ways and venues.

This is unprecedented. And it goes well beyond simply having a bad week.