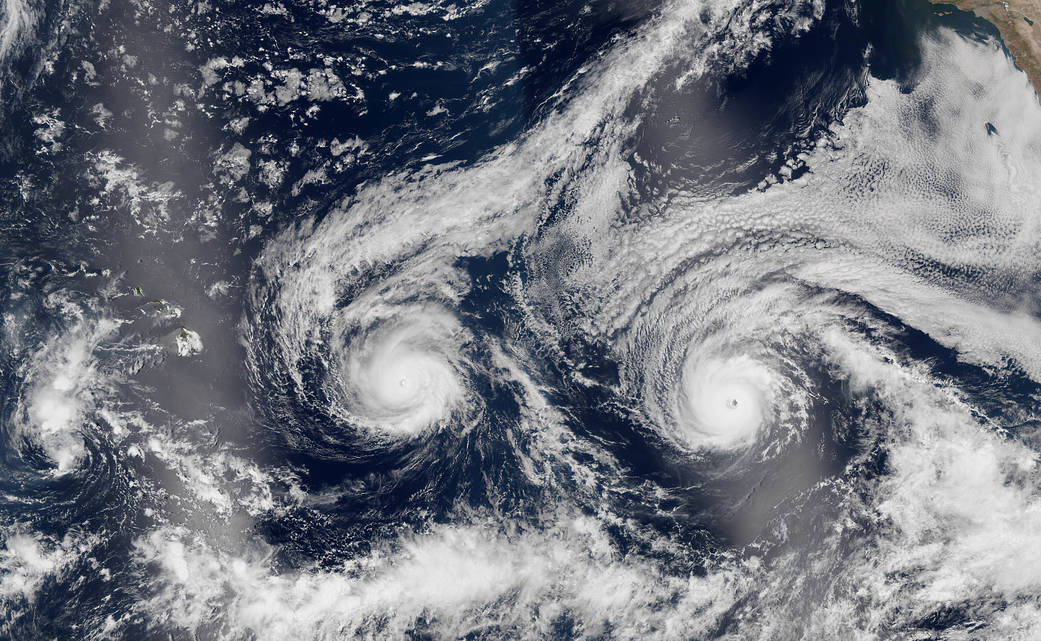 The island of Hawaii rarely takes a direct hit from a hurricane. This week, two Pacific storms are lining up to change that.

The natural-color image above is a composite built from two overpasses by the Visible Infrared Imaging Radiometer Suite (VIIRS) on the Suomi NPP satellite on August 29, 2016. At the time, Hurricane Madeline and Hurricane Lester were both hovering between category 3 and 4 storms. The bright streaks across the ocean surface (crossing Hawaii and Lester) are areas of sunglint, where sunlight reflected directly back at the VIIRS imager.

As of 11 a.m. (Hawaii time) on August 30, forecasters were predicting that Hurricane Madeline would pass just south of Hawaii as a category 1 storm in the evening on August 31. “This track will take the center of Madeline dangerously close to the Big Island of Hawaii late Wednesday and Thursday,” the forecasters at the Central Pacific Hurricane Center wrote. “Given its close approach and uncertainty in the track forecast, a Hurricane Warning has been issued for the Big Island of Hawaii.” Predictions call for 5 to 15 inches of rain over wide areas, raising the risk of flash floods and mudslides. Surf could reach 15 to 25 feet.

Lester is expected to approach Hawaii at hurricane force on September 2-3, though models are so far predicting that it will pass just north of the islands.

According to several news reports, no hurricane has made landfall on the Big Island since recordkeeping started in 1949. Only 13 hurricanes have passed within 200 nautical miles of the island in that time. Hurricanes Iselle and Julio threatened in 2014, as shown here.