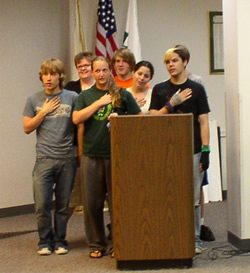 Members of the Rich East Gay Straight Alliance lead the Village Board in the Pledge of Allegiance at the board's Monday, June 25 meeting, prior to the board honoring Barbara Moore. (Photo: ENEWSPF)

Moore began her 24 year career with Park Forest in 1983 as the part time assistant to the director of economic development and community relations. She later went on to serve positions including the staff liaison for the equal opportunity employment review board, president of the league of women voters in the Park Forest Area and staff liaison to the commission of human relations.

In 1987, Moore helped lead a team of residents work to stop Marshall Fields from leaving Park Forest, whose efforts led to Park Forest become a finalist for the All American City Award.

“Be it further resolved that the board wishes Barbara Moore a long, happy and healthy retirement during which she enjoys family and other interests,” the resolution read.

Several trustees wished Moore luck in her future and expressed appreciation for her work.

Trustee Georgia O’Neill, who joked despite being neighbors they only saw each other at work, also expressed appreciation.

“We haven’t had a chance to be neighbors in every sense of the word, but maybe now we will,” O’Neill said.

Moore, who was in attendance with her husband, thanked the trustees and the village for the privilege.

“It has been a sincere pleasure,” she said. “You just can’t replicate some of the things we’ve done.”

The board also adopted the 2007 Budget for all corporate purposes for the fiscal year 2007 after the final reading. The proposed Hidden Meadow’s property sale and transfer for a proposed housing development passed first reading with no discussion.

All members were in attendance except Mayor John Ostenburg, who was on vacation. Senior Trustee Ken Kramer was apponted President pro tem in Ostenburg's absence. 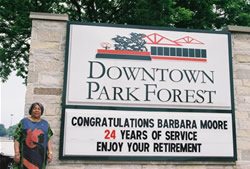