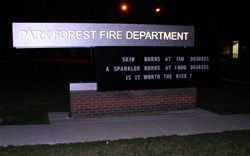 The sign outside the Park Forest Fire Station warns, "Skin burns at 150 degrees, a sparkler burns at 1800 degrees. Is it worth the risk?"

Park Forest, IL—(ENEWSPF)— In 2005, the U.S. hospital emergency rooms treated an estimated 10,800 people for fireworks related injuries, according to data from the National Fire Protection Agency.

“We don’t allow children to use matches, so they shouldn’t be using fire works which can burn four times hotter,” Wheeler said. “I don’t recommend children use any fire works.”

Wheeler said there have been multiple cases of injuries of fireworks to children, some lower than 4 years old, including an 11 month old who was injured by a sparkler.

In Illinois, consumer fire works displays are illegal unless approved by the fire department, which requires training to use. Wheeler said while using fire works, it is recommended to keep a bucket of water or sand handy.

In 2005, U.S. hospital emergency rooms treated an estimated 10,800 people for firework related injuries, 54 percent were burns, while 29 percent were contusions and lacerations. Nearly half of the people injured were under the age of 15, with the risk of fire works nearly three times as high for children ages 10 – 14 as for the general population. Sparklers, fountains, and novelties alone accounted for 26 percent of the emergency room fireworks injuries in 2005, according to a report from the NFPA.

In 2004, fire works caused an estimated 1,500 total structure fires and 600 vehicle fires reported to fire departments. These 2,200 fires resulted in an estimated 20 civilian injuries and $21 million in direct property damage, according to the report.

The Illinois Fireworks Use Act stipulates that the State Fire Marshal must keep a list of approved fireworks. The following novelty fireworks are expressly excluded from the definition of Consumer Fireworks:

Approved Consumer Fireworks are strictly controlled. According to the Office of the State Fire Marshal:

Consumer Fireworks Retailers/Distributors registered with OSFM may sell approved Consumer Fireworks to consumers who have and display a valid Fireworks Permit, issued by the local county or municipality to that consumer. (Emphasis added)

Also allowed are mines, comets, tubes, shells, fancy florals and parachutes, which create a low-level aerial effect which is propelled into the air by a lift charge. These items contain a maximum of 40 grams of chemical composition and no more than 20 grams of lift charge, according to the Fireworks Use act.

The following are strictly forbidden: