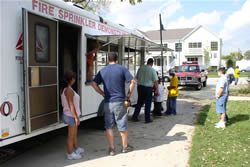 Chief Wilcox indicated some of the reasons that residents might want to consider fire sprinklers in their homes, “In this country, we know what the fire problem is, we know what the solutions are, but we haven’t got to the engineering solution, and this is the engineering solution. We’re encouraging the folks to come out and see the demonstration so they can see just how effective these things are.”

The Chief said the cost to put sprinklers in a new home is about 1 to 1 1/2 percent of the cost of a construction, “It gets fairly cost prohibitive if you’re going to rehab an existing home, but the time to do it is when you’re building your home.”

Chief Wilcox said there were over 3,200 fire fatalities in the United States last year.

“Would you think that’s a lot in comparison to the total population of the United States?  Would it surprise you to know that the United States has more fire fatalities than any other industrialized country in the world? Beyond all that, what if I put it into the perspective of, if we were to crash a Boeing 777 each month, all year long, and then from Thanksgiving through the end of December we crashed one once a week, what do you think would happen? Because that’s the same number of people who die every year in house fires.”

More information on residential fire sprinklers is with the Fire Department at 708-748-5605.

“I think we all know the answer to that.  It wouldn’t take two months in a row, and every 777 would be grounded.”

Wilcox says Sprinklers are engineering solution, and that there is new data coming out that indicates that, as far as house fires go, many people have died in their homes before the fire department even knows there’s a fire.

During the demonstration of the sprinkler system, Lt. Mike Wheeler said, "If you have a fire in your house, that room will reach what we call a ‘flash over’ stage. In a flash over stage, everything is burning in the room including the smoke — the fire is all the way to the floor.  If anybody was in the room, they wouldn’t survive.”

Home sprinkler systems are not designed to put out a fire, Wheeler says.  They’re designed to keep the fire under control so all the people can get out.  If it does put out the fire, Wheeler says, "That would be great.”  But the intention is to control the fire, to provide a safe path, so the people in the house can get out, and keep the fire manageable until the fire department gets there.

"We would like to see [home sprinkler systems] mandatory, but the reality is, codes haven’t changed yet.  A hundred years ago, people didn’t have running water in their houses.  If you went to the bathroom, you had to go out to the outhouse.  [Running water] became popular.  You don’t even think about it.  If you build a house, you don’t even think twice about it.  If you have electricity in your house, you run conduit, nobody thinks twice about that.  I’m going to say that, probably, in 10 to 15 years, new homes are going to have sprinkler systems.  Nobody’s going to think twice about it, they’re going to be in there.  The reality is, though, a lot of people want them in, but they’re having a difficult time getting them."

During the demonstration, the fire grew very quickly, and the heat was noticeable to those outside the van, even on an afternoon that was unusually warm for October. 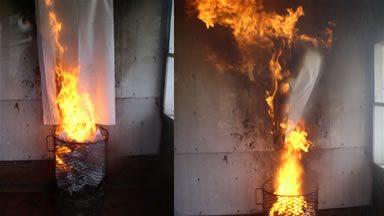 The flames spread very quickly, only to be doused moments later by the residential-style sprinkler system in the van.