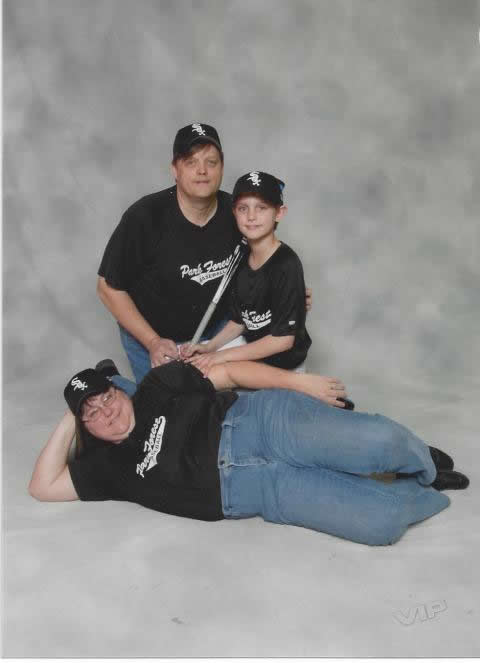 Park Forest, IL-(ENEWSPF)- For eight years, Al and Mary Kay Joens lived quietly in the south suburban community of Park Forest. Then they became involved in youth baseball. Today, they can’t go to the grocery store without running into an army of people they know.

“We went from being unknown to everybody knowing who we are,” said Al, whose son A.J. joined Park Forest Baseball at the age of five and continues to play at age 12. “I’ll be a part of baseball till the day I take my last breath. I love the kids.”

Mary Kay agrees that the couple’s involvement in baseball was life changing.

“It’s in our blood and we can’t let it go,” she said. “Our life is the baseball field. Where most people take kids to the movies, we take ours to the baseball field. It brings out the kid in you. It’s so enjoyable and we’ve made such great friends. We’ll always be able to look back and have wonderful memories of our time in the league with our son.”

Al currently serves as a division director in the Pony Baseball and Softball Association, overseeing more than 700 teams in Wisconsin and Illinois. He even sits on the association’s international board of directors

The Joenses love baseball so much, they even umpire on the side for other associations and leagues. Al umpires both baseball and basketball games throughout the Southland for the Illinois High School Association. Mary Kay umpires for teams within the Greater South Suburban Baseball League, traveling regularly to Country Club Hills, Hazel Crest and Matteson.

Youth baseball has been a tradition in Park Forest since 1951, but during the last decade, the numbers steadily declined. Park Forest Baseball is even the subject of a recent documentary by Mark Kundla, a media producer and adjunct professor of media studies at Governors State University, and vice chairman of Park Forest Baseball.

“Park Forest was known for its huge baseball tournaments for many years,” said Mary Kay. “But now kids have so many choices of activities. But baseball is starting to gain again. We’re making good progress.”

Park Forest Manager Tom Mick credits the couple for bringing the Village’s youth back to baseball.

“Al and Mary Kay Joens are stalwart volunteers in the Park Forest youth baseball organization,” Mick said. “They have been the leaders of this organization for the past several years and have spearheaded a rebirth of youth baseball in our community. Their volunteer time is seemingly endless in spite of baseball season, which is supposed to run from April to July.”

The couple also brings the joy of baseball to children who otherwise would not be exposed to the game.

“Sunday is dedicated to special needs children,” said Al, an account executive with World Data System. “We invite the kids to Central Park and teach them the skills of baseball and softball, how to catch and throw, bat and run bases. We have a cookout for them. Then we split up the players and play a game.”

The couple’s dream is to build an indoor baseball training facility for children in the Southland. Its estimated cost of $350,000 doesn’t seem to frighten or discourage them. They’re currently working to raise money and secure a grant.

“It’s a big endeavor, but eventually we’ll get there,” Mary Kay said.

To help raise funds, a spaghetti dinner and silent auction are scheduled for May 9, beginning at 5 p.m., at Zion Lutheran Church in Matteson. Some of the impressive prizes include a weekend at Baileys Harbor Yacht Club Resort in Door County, Wisconsin. More information about the fundraiser is at www.parkforestbaseball.org.

Everything the Joenses do seems to go toward the same end: to bring the game of baseball into the lives of young people, in the hope that it will give them as much joy as it has given their family.

“We’re blessed,” said Al. “We’ll be in baseball for as long as we’re physically able. We’re a baseball family.”