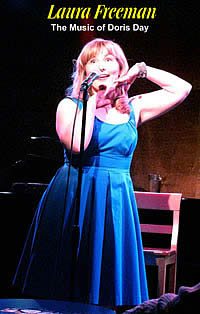 One of the metro area’s most visible performers, Freeman says she excited about her upcoming debut appearance in the historic 280-seat performing arts venue.

Talking about her show, Freeman celebrates the inimitable Day.

“I convey and portray her essence and talk about her life.”

Of course, she sings many hits from Day’s extensive repertoire, including “Sentimental Journey,” “Secret Love” and “Que Sera, Sera (Whatever Will Be, Will Be”), which became her signature number.

Surprisingly, Day “resonates with younger people, many in their 20s” as well as with the older fans who recall her many film roles, including those with Rock Hudson, Freeman says. Day’s scripts with the late Hudson always portrayed her as a good girl – impish and demure but strong-willed and always gorgeous behind a softly focused camera lens.

“Her husband (producer Martin Melcher in the 1950s and ‘60s) wanted to keep her in the good girl roles; she was not allowed to grow as an actress,” Freeman adds.

Between songs, Freeman talks about Day’s well-known animal welfare activism, her reclusiveness during these last few decades and many surprising details of her private, often tragic life.

The Freedom Hall Matinee Series continues with Mac Frampton on Dec. 10 followed by “Close to You – The Music of the Carpenters” on Feb. 18. The internationally acclaimed “Cherish the Ladies” will appear on March 25 and the series will close on April 8 with “The King, The Killer, and the Cash,” a tribute to Elvis Presley, Jerry Lee Lewis and Johnny Cash.

Details of the Main Stage and Family Series also can be found at the Freedom Hall website.

Laura Freeman sings "I’ve Never Been To Me"

Previous articleUp in Smoke: A Timeline of Marijuana Use in the U.S.
Next articleWhite House Weekly Address: Enrolling in the Affordable Care Act Marketplace