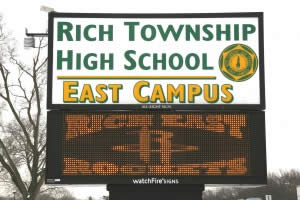 Rich East High School will be inducted into the Park Forest Hall of Fame this year. (Photo: ieanea.org)

Park Forest Hall of Fame members are listed on the society website at www.parkforesthistory.org.

Ruth Henkel was one of the founding members of the Park Forest Nurses Club which provided nursing services, continuing education and scholarships As the Nurses Club historian, she was instrumental in putting together the group’s archives from its start in 1950 to its last meeting in 2012. A member of the Sauk Trail Chapter of the Daughters of the American Revolution since 1980, she has helped with genealogy, veterans, scholarships, and nursing homes. Ruth is a long time member of Grace United Protestant Church, and also served as a leader for Camp Fire Girls. Ruth was the nurse at the Glenwood School for more than 40 years.

James Henkel moved to Park Forest in 1951 with wife, Ruth. Jim built and monitored bluebird houses for the Audubon Society, managed boys’ baseball teams, and has volunteered for the Park Forest Historical Society.

In 1987, Jim became involved in maintenance and set-up of the Kiwanis Pankatron machine, used for more than two decades at the club’s annual Pancake breakfast. He is an active member of Grace United Protestant Church.

A. Wayne Mann moved to Park Forest in 1951, and quickly worked with school and Village officials to create after-school programs for the growing numbers of children in the booming community. He developed numerous events for youth including numerous intramural events, the Canteen and similar programs that have been part of the Department’s programming for decades. He developed the Saturday morning adult basketball league and adult softball leagues for men and women.

Wayne combined his duties in the Village with his work as a teacher in Oak Lawn, Park Forest and as the assistant Superintendent of Schools for Palos Park District 118.

From the time he and his wife Terry moved to Park Forest in 1960, until his death in 2004, promoting the arts and the health services in Park Forest were a way of life for the late Ralph Medhurst.   He served for four years as co-chair for the Tall Grass Arts Association’s annual art fair, and for the Center for Performing Arts at Governors State University as a board member and worked with the university’s SCORE (Service Corps of Retired Executives) program. For the Park Forest Health Department he established the “Friends of the Health Department,” in an effort to help the underserved elderly. Ralph served on the planning board and as an attorney, and provided the pro bono legal work needed in order to create the group.

Ralph and his wife Terry both were involved in scouting programs with their five children.

Along with her husband Ralph, Terry Medhurst was actively involved in the arts and community life. She was a member of the Board of Directors of the Park Forest Arts Association for 15 years, holding positions as gallery chair and treasurer.

She held numerous positions with the South Cook County Girl Scouts, ranging from troop leader, director of the summer day camp to serving on the Board of Directors.

She helped bring the “Opera in the Classroom” program from the Lyric Opera of Chicago into elementary school classrooms.

Terry works with the Park Forest Community Garden, is a PADS volunteer, assists with the Food Pantry at St. Irenaeus Catholic Church and is an active member of Quilters Plus.

Robert A. "Bob" Navid opened a law practice in the Park Forest Plaza in 1953 and served the community for 24 years. Throughout that span, Bob was actively engaged in the public life of the community.

He served as Village Prosecutor and was twice elected Village Magistrate. As magistrate, Bob enjoyed the lighter side of being a judge, performing marriages, usually in the Navid home on Wilson Court.

A founder of the Park Forest Aqua Center, he was its secretary and attorney for more than 20 years. He also served on the boards of Westwood School PTA, Park Forest Rotary, Temple Beth Sholom, and at one time was the President of the Family Service and Mental Health Center of South Cook County, holding that last position until he retired in 1997.

Ruth P. Navid became active in school and scouting activities of daughters Lois and Jane, at the same time advancing her own education. Teaching became her passion. She developed creative and innovative approaches to education at Sauk Trail, Westwood and Mohawk schools. Upon retirement, her School District 163 colleagues honored her as a Superior Teacher.

Ruth supported and aided husband Bob’s increasing role in community leadership. When Bob would officiate at a wedding ceremony at home, it was Ruth who made the ceremonies so joyous by decorating the house with flowers and providing home-made pastries for the wedding couple.

Her commitment to Park Forest was wrapped up in a desire for all children and families to have an opportunity to grow and develop in a safe, loving, dynamic community.

Leadership, integrity and a reliance on a strong professional staff were hallmarks of Bob Pierce’s 20-year tenure as Park Forest Village Manager. From 1962 to 1982, Pierce -more-

guided the Village into a new era, expanding the cultural and environmental life of the Village ranging from the formation of Thorn Creek Woods, the planning and financing of Freedom Hall, his support for community diversity, the formation of Aunt Martha’s youth service center, and the establishment of new housing options for seniors.

He recommended the building the Fire Training Facility in the Village, which helped reduce insurance costs to property owners.

Pierce worked with Park Forest, Park Forest South, Will County, the State of Illinois and the private land owner and hammered out an agreement to preserve 800 acres of woodlands for present and future generations–Thorn Creek Woods.

Freedom Hall, a much needed community center was completed on schedule in 1976 and along with the creation of Aunt Martha’s, was a significant factor in the Village’s successful bid for its second All-America City award. Pierce also spearheaded efforts by staff to create a climate of diversity, one which set a nation-wide standard of excellence.

From the day it opened its doors in 1953, Rich East High School has been the pride of Park Forest and has become a standard of educational excellence with a distinguished honor roll of students and teachers and a noble history of what citizenry can accomplish.

In 1951, Park Forest residents, by a vote of 1,812 to 12, approved a bond issue to create a high school in the fledgling community. This overwhelming support by the citizenry led to the Village’s first All-America City award in 1953.

Through the years, both academic and athletic excellence has created a pattern of outstanding achievement for the school and the community. The most recent honor came in 2012 when U.S. News & World Report, for the third time in four years, recognized Rich East as one of this nation’s best high schools.   -more-

It is a record of distinction few schools can match.