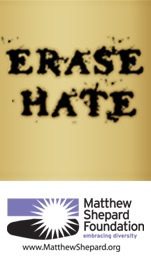 Judy and Dennis Shepard:  “The Matthew Shepard Act sends a bold and unmistakable message that violent crimes committed in the name of hate must end.”

“Today’s Senate vote sends a bold and unmistakable message that violent crimes committed in the name of hate must end,” said Judy and Dennis Shepard, Matthew Shepard’s parents.   “The Matthew Shepard Act is an essential step to erasing hate in America and we are humbled that it bears our son’s name.  It has been almost nine years since Matthew was taken from us.  This bill is a fitting tribute to his memory and to all of those who have lost their lives to hate.”

“We are especially thankful to Senator Gordon Smith (R-OR) and Senator Ted Kennedy (D-MA) for their unwavering leadership in ensuring the passage of this bill,” said Judy Shepard, Executive Director of the Matthew Shepard Foundation.

“For far too long this important piece of civil rights legislation has been misconstrued and distorted by its opponents,” continued Judy Shepard. “Both Houses of Congress overcame the lies and misinformation claiming the bill would take away our rights to free expression and religious liberty. Nothing could be further from the truth. Today we join with millions of Americans to encourage the White House to follow Congress and ensure that the Matthew Shepard Act becomes law.”

The legislation is formally entitled, the Matthew Shepard Local Law Enforcement Hate Crimes Prevention Act (S. 1105).  It was offered as a bipartisan amendment by Senator Ted Kennedy (D-MA) and Senator Gordon Smith (R-OR) to the Department of Defense authorization bill currently before the U.S. Senate.  The virtually identical House version of the bill passed overwhelmingly on May 3rd, 2007 with a bipartisan vote of 237 to 180 as an appropriate and measured response to the unrelenting and under-addressed problem of hates crimes against individuals based on sexual orientation, gender, gender identity and disability.

Current federal hate crimes law permits the federal prosecution of a hate crime only if the hate crime was motivated by bias based on race, color, religion, or national origin and the assailant intends to prevent the victim from exercising a "federally protected right" such as the right to vote or attend school. If this legislation is signed by the president, the law will be expanded to protect the GLBT community as well as remove the restrictions on what type of acts can be considered applicable under hate crime law.

Hate crime legislation was first enacted in 1968 when our country witnessed acts of violent hate focused at the African-American community. When Matthew was brutally murdered in 1998, the current hate crime statutes did not apply to the crime. Without the federal resources needed, finding justice for this horrific act cost Albany County, Wyoming more than $150,000 and forced the local law enforcement to furlough five members of its force.

The Matthew Shepard Foundation was founded by Dennis and Judy Shepard in memory of their 21-year-old son, Matthew, who was murdered in an anti-gay hate crime in Wyoming in October 1998. Created to honor Matthew in a manner that was appropriate to his dreams, beliefs and aspirations, the Foundation seeks to “Replace Hate with Understanding, Compassion & Acceptance” through its varied education, outreach and advocacy programs. For more information, please visit www.MatthewShepard.org

Editor’s Note: This evening, Diversity, Inc., celebrated its 25th Anniversary at the Olympia Fields Country Club.  We will report on this dinner in greater detail for Monday’s issue.  This organization is to be commended, indeed praised, for its marked commitment to work for sustainable diverse communities.  It is with some sadness, therefore, that we must note that the passage of the Matthew Shepard act by the United States Senate, an accomplishment which took years to achieve, receive no mention at all at tonight’s dinner.