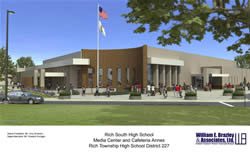 An architectural rendering of the addition that will be built at Rich South High School. (Graphic: Rich Township H.S. Dist. 227)

Park Forest, IL—(ENEWSPF)— For one day, Olympia Field and Richton Park area residents were able to watch school and village officials wear hard hats and do some digging.

“This is a great day for the Rich High School Township district,” said District 227 Superintendent Howard Hunigan. “Without tax payers this never could have occurred.”

School board president Tony Brunson spoke on the population increase, and the steps that lead to the decision for the construction.

“On behalf of the board of education, I want to thank everyone for making this possible,” Brunson said.

Ilandus Hampton, director of fiscal affairs for school district 227, said the construction at Rich Central will move the administration wing to the front of the building, and renovate the old administration wing into eight new classrooms. Rich Central will also have work done to areas such as the pond and adding press boxes to the baseball fields. 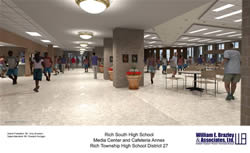 Interior sketch of the addition that will be built at Rich South High School. (Graphic: Rich Township H.S. Dist. 227)

Hampton said at Rich South the cafeteria will be moved out to help with motility in the school, which has been a problem at the school.

At the Rich South ceremony, Richton Park Mayor Rick Reinbold was in attendance.

“On behalf of the village board, thank you all,” Reinbold said.

Rich South booster club president Karen Marshall, whose daughter will be experience the new renovations, said she was happy to see the changes coming to Rich South.

Both ceremonies were concluded with school officials, village officials, and student council members digging a ceremonial scoop of dirt from the construction site.

No ceremony was held at Rich East High School, 300 Sauk Trail in Park Forest, because the majority of the construction is internal, Hampton said. 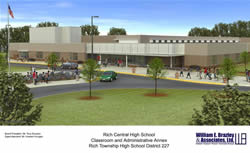 An architectural rendering of the exterior of the addition that will be built at Rich Central High School. (Graphic: Rich Township H.S. Dist. 227) 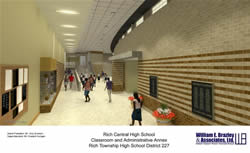 Drawing of the interior of addition that will be built at Rich Central High School. (Graphic: Rich Township H.S. Dist. 227)