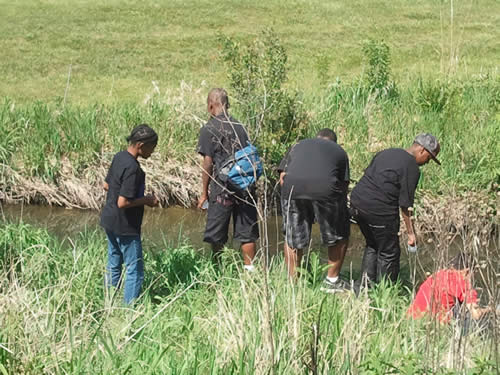 District 163 students survey the wetland area in Central Park, which has served as an outdoor science lab as they study wetland habitats. (PHOTO SUPPLIED)

The students’ planting project is an outgrowth of Park Forest Recreation and Parks Supervisor Rob Gunther’s plan to develop a garden of plants native to the Park Forest area. These plants include varieties that would be found prior to the development of Park Forest. Before the south suburbs became farmland and then towns, the topography subsisted of a mix of wetlands, forest, prairies, and many small creeks. In 2000, the Village of Park Forest reverted 45 acres of land at Central Park to its natural state, a wetland.  Since then, sixth graders from District 163 have contributed to the success of the wetland by planting thousands of native plants as part of their environmental education program taught by Thorn Creek Audubon Society member Michelle O’Connor and Marti Blaies of District 163’s Science Depot program. This year’s planting continued the tradition.

Thorn Creek Audubon and National Audubon provided funding for the new garden initiative through National Audubon Collaborative Grants of $750. The funds were used to purchase native plants that would attract hummingbirds and butterflies. The plants were provided by Possibility Place, a nursery dedicated to growing native plants, according to Ms. O’Connor.

“The students are fantastic garden planners and planters,” Ms. O’Connor said. “The new seedlings were strategically planted in smaller plots in the garden space. The idea is to create a garden that is pleasing to the eyes of humans and hummingbirds. The garden also will have a new interpretive sign that is provided by the Village. The sign displays an explanation of hummingbird migration and the small bird’s role in plant pollination. This new garden also ties in with Park Forest’s Community Garden program.”

Ms. O’Connor and Ms. Blaies encourage people to take a garden walk to enjoy the numerous plantings in the area. They suggest starting at the front of the Aqua Center, then strolling to the west wall of the Discovery Center to view the new garden, then on to the rain garden at the south end of the Aqua Center parking lot. From there, visitors should head south on the trail behind the swimming pools to see the pretty flowers along the paved trail. This trail takes walkers to the Park Forest Public Library, where a lovely garden rings the library.

Ms. O’Connor remarked, “Thanks to the sixth graders, National Audubon, Thorn Creek Audubon and the Village of Park Forest, there is a healthy, beautiful community for people, plants, birds and animals.”