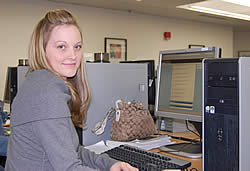 Meaghan Avolio of Orland Hills worked with fellow team members at Governors State University to finish in the top three percent of all participants in an online business competition. (PHOTO SUPPLIED)

The eight-week Capstone Challenge tests business students’ ability to succeed in the 21st century corporate environment. Thousands of undergraduate and graduate business students across the United States and in foreign countries participate in the online learning exercise.

Team Baldwin, one of five squads in Barsuk’s class this fall, finished in the 97th percentile among 1,538 teams taking part in the competition. The team had top 10 finishes in profitability and stock price. It registered as high as second, in some categories, among all teams following two weekly rounds.

“It says something for our college that they are rated so high,” Barsuk said. “It shows that we are turning out top graduates who are making an impact on the job world.”

This fall’s section of Management 469 was exclusively an online class. Avolio said she and her fellow team members never got together in person but would meet online each Sunday to make decisions before filing their assigned work. Early in the competition, Avolio said she spent as much as eight hours a week on the competition. By the time it ended, she’d cut that number to two or three hours a week.

“Going through all the numbers was time-consuming but it was important to understand how they were being used,” said Avolio, who is graduating in January. “I’m an accounting major and I actually thought this was a lot of fun.”

The competition takes students through eight years of managing a company that manufactures electronic sensors. Each week represents one fiscal year and participants must make decisions that effect the viability and profitability of the company. Students must answer practical questions, such as whether they should invest in more workers or in automation. They must manage money wisely, act competitively, and take effective steps to position their product in the marketplace.

Barsuk said he reviews the weekly results of each team with his students, but doesn’t give them any management tips while they’re taking part in the competition. “I just tell them to come up with a strategy, and to work that strategy,” he said. “Obviously (with Team Baldwin), the strategy worked.”