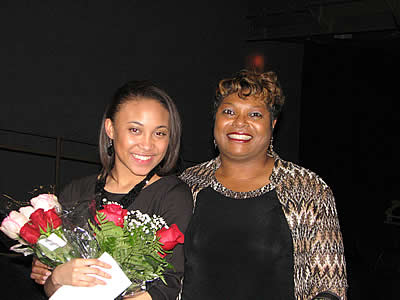 Brown, 17, a member of Southland’s National Honor Society who aspires to be an attorney, competed in an original field of several hundred speech and theatre high school students from the Chicago metropolitan area. Two other Southland College Prep students, Josha Silk and Aronna Wynne, also were among the 22 finalists in tonight’s competition.

Brown won a $500 prize, a partial scholarship to University of Illinois Chicago and an all- expenses paid opportunity to travel to New York City in May, 2013 to compete in the national August Wilson Monologue Competition on the stage of the August Wilson Theatre on Broadway.

The late August Wilson earned the Pulitzer Prize for Drama twice and several of his productions received the New York Drama Critics Circle Award for best play. The American playwright is recognized for his large body of work that depicts the comic and tragic aspects of African-American experience in the 20th century.

Ten of Wilson’s plays, referred to as his " Century Cycle," are set in a different decade of the 20th century and aim to sketch the Black experience during those years and raise consciousness through theater.

"I’m so pleased that this competition gives students an opportunity to learn about playwright August Wilson. But it also offers them a chance to share his message that African- American history is American history," said Cheryl Frazier, Southland College Prep’s Director of Speech and Theatre.

Each of the students in tonight’s Chicago finals competition performed on the stage of the Owen Goodman Theatre in the Goodman Theatre Center. They prepared a short monologue of their choosing from one of ten plays written by August Wilson. Judges evaluated preparedness, understanding of text, emotional connection to the material and a commitment to their performance.

The competition is conducted in association with the Goodman Theatre, League of Chicago Theatres, University of Illinois Chicago’s Chance Program and the University’s Department of Theatre and Music.