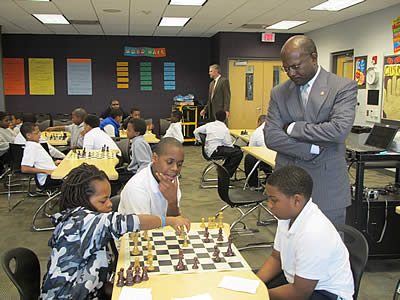 Riley, who provided the prizes and medals for the contest, told students about Maurice Ashley, the first African-American to attain the title of International Grandmaster of Chess. He also explained the benefits of chess.

“Chess teaches discipline, patience, planning and many other skills that are so important to success in life,” Riley said. “The intensity and challenges inherent in a good chess match make most video games pale by comparison. I always wanted to stage a large regional tournament consisting of teams from elementary, middle and high schools. I’ll get there one day, but I decided to start by sponsoring a tournament in one district.  The superintendent, board and administration were receptive to my idea and the rest was history.

“This was a very successful, rewarding activity. Colin Powell Middle School is an impressive physical plant and was a great host. The young participants were fantastic. The more experienced players served as mentors for the younger students. They were all respectful of each other and the final match had everyone riveted to the main board. I’m extremely proud of these students and can’t wait until next year.”

Elliott Johnson, president of District 159’s board of education, helped organize the tournament with Riley.

“Being board president, and understanding how passionate Al Riley is about promoting programs that really engage youth, we came up with the idea of a chess tournament to promote strategic and analytical thinking,” Johnson said. “We polled our students and parents to see if they would be interested in a district-wide chess tournament, and the response was overwhelmingly positive. My hope is that this will eventually lead to a region-wide tournament where we can invite schools across the south suburban region to participate.”

Twenty-two students participated in the tournament.