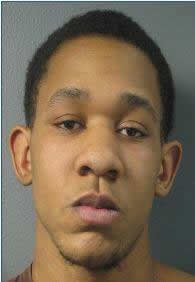 "On 1/31/15 around noon, Officers were dispatched to a store on the 2500 block of Western Avenue reference a customer dispute. Jlyn Graham, age 20, of Chicago, was identified as being involved, however responding officers reported he refused to identify himself.

"When told he was not free to leave and could be subject to arrest for refusing to identify himself, he told officers, "You’ll have to catch me first", and ran away. Officers obliged and after a foot pursuit caught Graham and took him into custody.

"Investigation revealed he had caused a disturbance inside of the store and had battered a store employee after he was not allowed a refund on an item. Graham was charged with disorderly conduct, battery and resisting a peace officer."

An arrest does not mean that a person is guilty. All those arrested are presumed innocent until proven guilty.