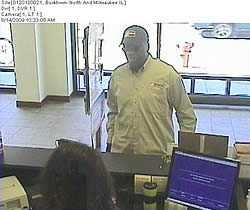 Chicago, IL–(ENEWSPF)– Robert D. Grant, Special Agent-in-Charge of the Chicago office of the Federal Bureau of Investigation (FBI) is asking for the public’s help in identifying the individual depicted in the attached wanted flyer, who is believed to be responsible for the armed robbery of seven (7) Chicago and suburban banks dating to August of 2007.

The most recent robbery occurred on August 14th of this year at the Bank of America branch, located at 1585 North Milwaukee Avenue in Chicago. As he has done in previous incidents, the robber entered the bank and approached a teller, handing her a note announcing a robbery and threatening her with harm, if his instructions were not followed. The robber was armed with a handgun, which he displayed to the teller, but was not discharged. He then placed a bag on the counter and orally instructed the teller to fill it with cash from her drawer. The robber further instructed the teller not to place any security devices into the bag, again threatening her with harm. After receiving an undisclosed amount of money, the robber fled the bank on foot, disappearing into the passing crowd.

The robber has been described by witnesses as a black/male; 40 – 50 years of age, 6’- 6’2” tall, heavy build. He was wearing a dark colored baseball style cap, sunglasses and dark gloves. He has been given the moniker of the “Einstein Bandit” due to the distinctive “E=mc2” mathematical formula that was on both the cap and jacket he has worn during several of the robberies.

Anyone recognizing this individual or having any information about this robbery is asked to call the Chicago FBI at (312) 421-6700.

This case is being investigated by the Chicago FBI’s Violent Crimes Task Force, which is comprised of FBI Special Agents, Detectives from the Chicago Police Department and Investigators from the Cook County Sheriff’s office.