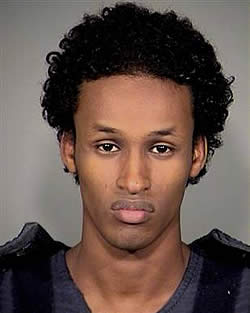 Portland, OR-(ENEWSPF)- Mohamed Osman Mohamud, 19, a naturalized U.S. citizen from Somalia and resident of Corvallis, Ore., has been arrested on charges of attempting to use a weapon of mass destruction (explosives) in connection with a plot to detonate a vehicle bomb at an annual Christmas tree lighting ceremony in Portland, Ore., the Justice Department announced.

According to a criminal complaint signed in the District of Oregon, Mohamud was arrested by the FBI and Portland Police Bureau at approximately 5:40 p.m. (PST) Nov. 26, 2010 after he attempted to detonate what he believed to be an explosives-laden van that was parked near the tree lighting ceremony in Portland’s Pioneer Courthouse Square. The arrest was the culmination of a long-term undercover operation, during which Mohamud had been monitored closely for months as his alleged bomb plot developed. The device was in fact inert; and the public was never in danger from the device.

Mohamud is expected to make his initial appearance in federal court in Portland on Monday. He faces a maximum statutory sentence of life in prison and a $250,000 fine if convicted of the charge of attempting to use a weapon of mass destruction.

Dwight C. Holton, U.S. Attorney for the District of Oregon, said, “This defendant’s chilling determination is a stark reminder that there are people—even here in Oregon—who are determined to kill Americans. The good work of law enforcement protected Oregonians in this case—and we have no reason to believe there is any continuing threat arising from this case.”

“The complaint alleges that Mohamud attempted to detonate what he believed to be a vehicle bomb at a crowded holiday event in downtown Portland, but a coordinated undercover law enforcement action was able to thwart his efforts and ensure no one was harmed,” said David Kris, Assistant Attorney General for National Security. “While the public was never in danger from the device, this case serves as yet another reminder of the need for continued vigilance both at home and abroad.”

“The threat was very real. Our investigation shows that Mohamud was absolutely committed to carrying out an attack on a very grand scale,” said Arthur Balizan, Special Agent in Charge of the FBI in Oregon. “At the same time, I want to reassure the people of this community that, at every turn, we denied him the ability to actually carry out the attack.”

According to the affidavit filed in support of the criminal complaint, in August 2009, Mohamud was in e-mail contact with an unindicted associate (UA1) overseas who is believed to be involved in terrorist activities. In December 2009, while UA1 was located in the northwest frontier province of Pakistan, Mohamud and UA1 discussed the possibility of Mohamud traveling to Pakistan to engage in violent jihad. UAI allegedly referred Mohamud to a second unindicted associate (UA2) overseas and provided Mohamud with a name and email address to facilitate the process.

At a second meeting in August 2010, Mohamud allegedly told undercover FBI operatives he had been thinking of committing violent jihad since the age of 15. According to the affidavit, Mohamud then told the undercover FBI operatives that he had identified a potential target for a bomb: the annual Christmas tree lighting ceremony in Portland’s Pioneer Courthouse Square on Nov. 26, 2010.

According to the affidavit, the undercover FBI operatives cautioned Mohamud several times about the seriousness of this plan, noting there would be many people at the event, including many children, and emphasized that Mohamud could abandon his attack plans at any time with no shame. “You know there’s gonna be a lot of children there?” an undercover FBI operative asked Mohamud. According to the affidavit, Mohamud responded that he was looking for a “huge mass that will…be attacked in their own element with their families celebrating the holidays.” Further discussing the attack, Mohamud allegedly stated, “…it’s in Oregon; and Oregon like you know, nobody ever thinks about it.”

The affidavit alleges that in subsequent months, Mohamud continued to express his interest in carrying out the attack and worked on logistics. He allegedly identified a location to place the bomb and mailed bomb components to the undercover FBI operatives, who he believed were assembling the device. He also mailed them passport photos, as part of a plan to help him sneak out of the country after the attack. In addition, Mohamud provided the undercover FBI operatives with a thumb drive that contained detailed directions to the bomb location and operational instructions for the attack.

According to the affidavit, on November 4, 2010, Mohamud and the undercover FBI operatives traveled to a remote location in Lincoln County, Ore., where they detonated a bomb concealed in a backpack as a trial run for the upcoming attack. Afterwards, on the drive back to Corvallis, undercover FBI operatives questioned Mohamud as to whether he was capable of looking at the bodies of those who would be killed in the upcoming attack in Portland. According to the affidavit, Mohamud responded, “I want whoever is attending that event to leave, to leave either dead or injured.”

Earlier this evening, Mohamud was arrested after he attempted to remotely detonate what he believed to be explosives in a van that was parked near the Christmas tree lighting ceremony in Portland, the affidavit alleges.

This case was investigated by the FBI, with assistance from the Oregon State Police, the Corvallis Police Department, the Lincoln County Sheriff’s Office, and the Portland Police Bureau. The prosecution is being handled by Assistant U.S. Attorneys Ethan D. Knight and Jeffrey Sweet from the U.S. Attorney’s Office for the District of Oregon. Trial Attorneys Jolie F. Zimmerman and David Cora, from the Counterterrorism Section of the Justice Department’s National Security Division, are assisting.

The charges and allegations contained in the criminal complaint are merely allegations, and the defendant is presumed innocent unless and until proven guilty.