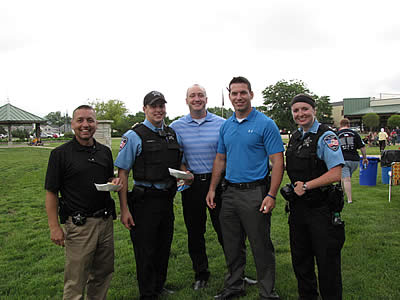 A resident told police on July 11 that she discovered over $1600 in fraudulent checks written against her bank account. Police have suspect information and are investigating.

A blue Schwinn 10 speed bicycle was reported stolen from the 100 block of Birch Street on July 11.

A man shooting pool at a business in the 300 block of Victory Drive struck another man in the back of the head when the second man asked him to switch billiard tables, according to police. The report was made on July 12.

A purse, some CDs, and a set of headphones were reported stolen from a vehicle parked in the 200 block of Fir Street on July 16.

A juvenile was arrested on July 18 and charged with theft after police received a report on July 17 that a bike was stolen from the 200 block of Arrowhead Street.

Patricia M. Lindsey, 64, 814 Greenbriar Lane, University Park, was arrested on July 20 and charged with driving under the influence of drugs, operation of a motor vehicle without headlights when required, and possession of cannabis when police working a roadside safety check stopped the vehicle Lindsey was driving after noticing a strong odor of cannabis emanating from the vehicle, according to police.

The driver’s side front window of a vehicle parked in the 200 block of South Orchard Drive was reported shattered on July 23. Additionally, the ignition cover was found hanging from the steering column and papers were spread on the passenger floorboard, according to police.

The owner of a vehicle that was parked in the 200 block of Allegheny Street on July 23 told police that someone put sugar in the gas tank of the automobile. Police are investigating.

Two vehicles parked in the first block of South Orchard Drive on July 23 were vandalized with large dents in the hood of each vehicle consistent with an unknown person sitting or possibly jumping on the hood of each car, according to police.

A man walking near the intersection of Miami Street and Central Park Avenue on July 23 at approximately 10:12 PM told police that he was grabbed by five male black subjects and one male white subject. The subjects went through his pockets taking $15 cash and an Illinois Link card, according to police.

Approximately $2000 cash was reported stolen from a residence in the 23400 block of South Western Avenue during a residential burglary on July 24.

A pink Schwinn Destiny bicycle valued at $189 was reported stolen from outside a residence in the first block of McCarthy Road on July 24.

Three juveniles were issued municipal citations charging trespassing when police were dispatched to the Park Forest Aqua Center on July 24 in reference to a complaint of juveniles swimming in the pools while the facility was closed.

Two vehicles parked in the 100 block of North Arbor Trail were reported broken into on July 25 when an owner of the vehicles discovered both drivers side Windows had been smashed. A stereo was removed from one vehicle and passenger side plastic was removed and damaged from the stereo mount area in the second vehicle, but the second stereo was not removed. Police are investigating.

According to police, someone opened an unlocked vehicle parked in the 200 block of Dogwood Street on July 26 and went through the glove box and center arm rest area. Nothing was reported stolen.

Approximately $10 cash and a large box containing "Kicker" speakers are among the items reported stolen from an unlocked vehicle parked in the first block of Cedar Street on July 26.

An orange and pink comforter was reported stolen from an unlocked vehicle parked in the first block of Cedar Street on July 26.

Between six dollars and eight dollars in change was reported stolen from an unlocked vehicle parked in the first block of Cedar Street on July 26.

A teal blanket was reported stolen from an unlocked vehicle in the first block of Cedar Street on July 26.

An exterior central air-conditioning unit and a furnace were reported stolen from a residence in the 400 block of Indiana Street on July 27.

Assad A. Alton, 210 Nashua St., Park Forest, was arrested on July 27 and charged with aggravated assault when police responded to the 200 block of Nashua Street to investigate a report of a domestic disturbance.

An officer was dispatched to Advocate South Suburban Hospital, 17800 Kedzie Ave., Hazel Crest, on July 28 to investigate a report of aggravated battery. While en route, dispatch related that emergency room personnel were treating a subject who entered the ER with apparent stab wounds which had occurred in Park Forest. Police have suspect information and are investigating. The victim was treated and released from the hospital.

A purse was stolen from a counter at the food pantry at St. Irenaeus Church on July 28.