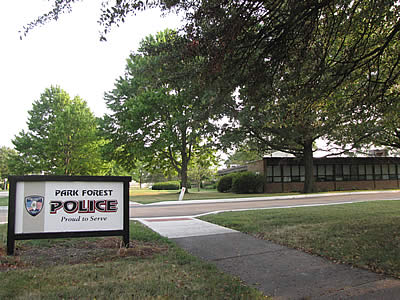 Devante J. Johnson, 22, 1436 Ambassador Lane, Ford Heights, was arrested on June 12 and charged with unlawful possession of cannabis when an officer continued an investigation that originated in the 100 block of Algonquin Street.

A red Cannondale mountain bike and a Giant brand road bike were reported stolen from an unsecured car port in the 300 block of Oakwood Street on June 17.

Two juveniles were arrested on June 17 and charged with one count of retail theft each when police were dispatched to a business in the first block of Main Street to investigate a report of retail theft.

A door of a residence in the first block of South Arbor Trail was reported damaged by being forced open, the locking mechanism cracking the wooden frame in the process. The report was made on June 18. Nothing was reported stolen from the residence. Someone was at home when the door was forced open.

A brown and grey Yorkie named "Pineapple" was reported stolen from outside a residence in the 200 block of Allegheny Street on June 19.

A lawnmower, a snow blower, and a generator were reported stolen from an unsecured garage during a burglary at a residence in the 300 block of North Orchard Drive on June 19.

Piere V. Smith, 19, 3135 Holden Circle, Matteson, was arrested on June 19 and charged with obstructing identification and processed on a warrant out of Cook County when police responded to the 200 block of Lee Street in reference to a report of a disturbance.

Someone set fire to the contents of a trashcan in the women’s restroom at Central Park, 420 Lakewood Boulevard, on June 20. The Park Forest Fire Department responded and extinguished the smoking burnt ash inside the trashcan. No permanent damage was found to the restroom or the trashcan, according to police.

Two juveniles were arrested on June 20 and issued municipal citations charging battery when an officer patrolling in the area of Village Hall observed the two juveniles fighting near the west side of the building, at first engaging in a verbal altercation followed by a physical altercation, according to police.

The front passenger-side window of a vehicle parked in the first block of Apple Lane was reported shattered on June 20.

Terrell Smith, 37, 7128 S. Wentworth Ave., Chicago, was arrested on June 20 and issued a municipal citation charging battery when police were dispatched to a parking lot in the first block of South Orchard Drive in reference to a large group of juveniles causing a disturbance. According to police, Smith told them he believed that one of the juveniles had stolen his cell phone and allegedly went to confront the juvenile. The cell phone was later recovered by a carnival employee and had not been stolen, according to police.

Police were dispatched to investigate a residential burglary in the 300 block of Winnebago Street on June 20. A lower-level window of the house was completely shattered, according to police. Police discovered broken dishes scattered on the floor of the kitchen and a family room to be in complete disarray. A flute, two flat-screen televisions, and some cash are among items reported missing.