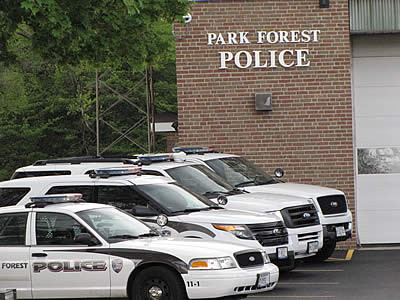 A juvenile was arrested on April 14 and charged with improper walking in the roadway and resisting a peace officer when police responded to the 200 block of Green Street in reference to a report of a large group of subjects fighting in the street.

Police were dispatched to a business in the 400 block of Sauk Trail on April 14 to investigate a report of a subject attempting to use a counterfeit $50 Bill to purchase items. Police are investigating.

An insurance card and Illinois vehicle registration card were reported stolen from an unlocked vehicle parked in the 23400 block of South Western Avenue on April 14.

Fabian M. Guzman, 20, 431 Talala St., Park Forest, was arrested on April 15 and charged with one felony count of burglary, one felony count of criminal damage to property, and resisting a peace officer when police responded to a church in the 400 block of Indianwood Boulevard to investigate a burglar alarm.

An officer was assigned to investigate a credit card fraud complaint on April 15. The officer spoke to a resident who had received a call from her bank in reference to suspicious activity on her debit/credit card. Police are investigating.

Cynthia M. Velazquez, 33, 3435 Morgan St., Steger, was arrested on April 17 and charged with one count of felony retail theft when police were dispatched to a business in the 100 block of South Orchard Drive to investigate a retail theft in progress. Theresa M. Ward-Grossheider, 48, 524 Cornell Ave., Calumet City, was also arrested and charged with 4 counts of possession of a controlled substance.

A TomTom GPS valued at $100 was reported stolen from an unlocked vehicle parked in the 400 block of Neosho Street on April 17. A witness observed 3 male juveniles riding bikes. One of the juveniles stopped, opened the driver’s side door of a vehicle, and allegedly took an item from the interior of the vehicle, according to police. Police are investigating.

Cardarel J. Alexander, 23, 329 Sauk Trail, Park Forest, was arrested on April 18 and issued to municipal citations charging dogs running loose when police responded to the 300 block of Marquette Street to investigate a report of loose dogs.

A juvenile was arrested on April 20 and charged with criminal damage to property and disorderly conduct when police responded to the 100 block of Indianwood Boulevard in reference to a report of a disturbance.

A kitchen window on the rear of a house in the 200 block of Arrowhead Street was reported shattered on April 21.

Ricco V. Freeman, 45, 15424 Birch Rd., Markham, was arrested on April 21 and charged with possession of drug paraphernalia when police were dispatched to the 300 block of Tamarack Street to investigate a report of a domestic disturbance.

Police were dispatched to a residence in the 400 block of Natoma Street to investigate a report of a possible human bone found on that property. Police say the bone was cut very clean several inches above and below the joint and is approximately 9 inches in length. The recovered bone will be forwarded to the Will County Medical Examiner’s Office for further identification.

Several windows of a residence in the 300 block of Illinois Street were discovered to be broken when an officer conducted a premise exam of the residence on April 25.

An officer conducting a premise exam of a residence in the 400 block of Suwanee Street on April 25 discovered several broken windows on the residence.

A witness told police that a group of juveniles took a purse out of an unlocked vehicle in the 100 block of Algonquin Street on April 26.

Police responded to a residence in the 100 block of Algonquin Street on April 26 to investigate a report of reckless discharge of a firearm. A resident told police that he and his wife were sleeping and were wakened the previous night at about 10:30 PM by what sounded like gunshots. Police observed 4 holes in the South side of the resident’s plastic fence. Police are investigating.

Police observed several scratch marks on the driver side door, rear trunk hatch, and passenger side door of a vehicle parked in the first block of Park Street on April 26.

Tameika L. Johnson, 40, 376 W. 16th Pl., Chicago Heights, was arrested on April 28 and charged with obstructing identification, operating a motor vehicle with registration suspended for non-insurance, failure to yield to an authorized emergency vehicle, driving while license was suspended, and operating an uninsured motor vehicle. An officer patrolling northbound on Western Avenue approaching Beacon Boulevard observed that the vehicle Johnson was driving had tinted front and rear windows, according to police. The officer conducted a LEADS inquiry and learned that the status of the registration was suspended for a mandatory insurance violation, according to police.

Oliver Johnson, 71, 350 Juniper St., Park Forest, was arrested on April 28 and issued a municipal citation charging theft of property when police were dispatched to that address to investigate a report of theft.

Darrius D. Gilbert, 19, 402 N. Orchard Dr., Park Forest, was arrested on April 30 and issued tickets charging DUI, DUI over 0.08, and improper parking on a roadway when police were dispatched to Western Avenue at the CN railroad tracks in reference to a vehicle stopped in the roadway with the driver asleep at the wheel, according to police. Police say Gilbert had a blood alcohol level of .160 according to a breathalyzer test administered by police.

A green John Deere lawnmower model JS63, valued at $200, was reported stolen from an unlocked attached garage of a residence in the 200 block of Minocqua Street on April 30.

Tyree Fleming, 21, 17756 Turtlecreek Dr., Homewood, was arrested on April 30 and issued municipal citations charging improper lighting-one headlamp and possession of cannabis when an officer traveling northbound on Western Avenue near Algonquin Street observed that the vehicle Fleming was driving southbound on Western Avenue had only one working headlamp, according to police.