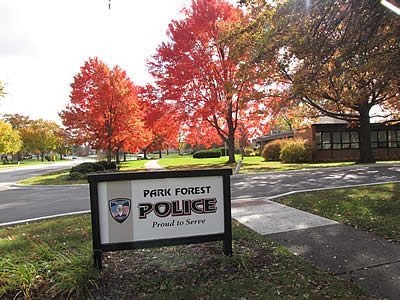 A black iPhone 4S was reported stolen from a desk in a classroom at Rich East High School, 300 Sauk Trail, on October 24.

A purse containing items valued at $30 was stolen from an unlocked vehicle in the 300 block of Minocqua Street on October 24.

An officer patrolling in the 400 block of Navajo Street on October 26 observed a subject he knew to have an active arrest warrant out of Will County in front of a residence, according to police. The subject, Alex Garcia, 20, 433 Navajo St., Park Forest, was told by the officer to stop and not to move, that he was under arrest, according to police. Police say Garcia went inside the residence. A woman, Maria Puente, 40, 433 Navajo St., Park Forest, emerged, demanding to know what was going on. She was arrested as officers were aware that she had an active arrest warrant from the Orland Park Police Department. Police entered the residence and yelled for anyone inside to come down. Police say there was no compliance. Police located Sergio Garcia, 24, 433 Navajo St., Park Forest, inside an upstairs bathroom. The arresting officer learned that Sergio had an outstanding arrest warrant out of Will County. A few seconds later, police say Alex emerged from a bedroom and was taken into custody by police. Sergio was processed under the Will County arrest warrant and charged with criminal damage to property. Maria was processed under the Orland Park arrest warrant. Alex was processed under the Will County arrest warrant and also charged with resisting a peace officer, according to police.

JD Murphy, (no middle initial), 65, 2939 West Walnut St., Chicago, was arrested on October 27 and charged with felony driving while license was revoked and issued traffic citations charging improper Lane usage, operating an uninsured motor vehicle, and given an additional citation charging use of a cellular phone while driving. An officer on patrol in the eastbound lane of Sauk Trail observed Murphy, traveling westbound on Sauk Trail, driving a vehicle while talking on his cell phone, according to police.

Police say a teenager was approached by a subject he knew near the intersection of Allegheny and Apache Streets on October 27. The subject asked to borrow his phone. The teenager gave the subject his phone, and the subject called his mother, according to police. The subject then ran off with the phone, a blue and black HTC smart phone valued at approximately $500. Police are investigating.

Four Goldway brand tires, valued at $1100, model 104VXL, size 255/30R/30, were reported stolen from a garage at a residence in the 200 block of Navajo Street on October 27. Police found no evidence of forced entry.

Police responded to 7-Eleven, 425 Sauk Trail, on October 28 in reference to a report of a robbery. Police spoke with the victim who said that she and her boyfriend had put her iPhone 5 for sale on Craig’s List. They were to meet potential buyers at that store. Police say two potential buyers showed up. One of them asked to see the phone, and, once he had possession of the phone, he ran from the store. Police are investigating.

Police responded to the viaduct on Orchard Drive on October 29 in reference to spray paint vandalism. Police located the spray paint on the west portion of the viaduct. Police took pictures of the spray painting and advised the Department of Public Works, which sent a crew to paint over the vandalism.

Milton Johnson III, 35, 14331 Paranell Ave., Harvey, was arrested on October 30 and charged with misdemeanor domestic battery when police responded to the 400 block of Indianwood Boulevard to investigate a report of domestic battery.

A white Apple iPhone 4S was reported stolen from a student at Rich East High School on October 30.

Louise J. Comer, 66, 206 Monee Rd., Park Forest, was arrested on October 31 and charged with domestic battery when police were dispatched to the 200 block of Monee Road to investigate a report of a 911 hang-up.

A juvenile was arrested and charged with domestic battery when police responded to a residence in the 100 block of Indianwood Boulevard on October 31.

A silver teapot, a silver coffee pot, a silver tray, a number of items of jewelry, and miscellaneous bank statements and documents are among items reported stolen during a burglary at a residence in the 200 block of Washington Street on October 31.

Police say a 10-year-old child who was waiting to be picked up from Forest Trail Middle School by a family member began crying after being shot by a paintball gun on November 1. Police say an unknown red vehicle passed by and the front seat passenger shot out of the front passenger-side window with a paintball gun. The child was struck by one of the orange paint balls. Police observed a contusion on his right thigh.

Two juveniles were arrested on November 1 and issued municipal tickets charging possession of cannabis when an officer patrolling in the area of Western Avenue and Sauk Trail observed the vehicle one of them was driving traveling southbound on Western Avenue over the posted speed limit, according to police. The driver of the vehicle was also issued a citation charging speeding over the posted limit. The vehicle was seized and towed per local ordinance.

Police say a vehicle parked in the first block of Hemlock Street was entered by force on November 2. Police say weather stripping located around the window of the driver’s seat had been damaged so the offenders could gain entry inside the vehicle.