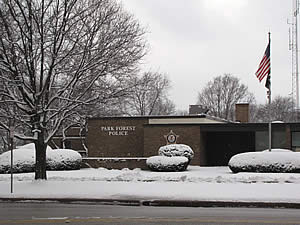 A winter past at the Park Forest Police Station. (ENEWSPF)

An iPhone valued at $300 was reported stolen from a vehicle parked in the 200 block of Westwood Drive on February 14.

Thomas W. Smith, 18, 24 East Rocket Circle, Park Forest, was arrested on February 15 and charged with possession of stolen property when an officer working at Rich East High School was summoned to a classroom to investigate a report of theft.

Officer Kessler and his canine partner Toby were dispatched to Rich South High School, 5000 Sauk Trail, Richton Park, to conduct a K-9 locker search on February 15. Police say K9 Toby alerted for the presence of narcotics by lying down and staring with his nose pointed toward the bottom of a locker at the school. Police recovered a cigar wrapper containing a green leafy substance, suspect cannabis, from the locker. The juvenile to whom the locker belonged was later issued a local ordinance citation charging possession of cannabis, according to police.

Julian M. High, 24, 2917 Nottingham Ave., Markham, was arrested on February 13 and charged February 15 with two counts of felony burglary after police investigated reports of burglary and damage to property at the Cedarwood Cooperative Office in the first block of Cedar Street. The first report was on February 7, 2013 (See ENEWSPF report here: Park Forest Police Reports/Blotter for February 11, 2013). Police say they have video surveillance evidence of two burglary incidences on February 4, 2013 and February 7, 2013. Police say during the course of their investigation, Julian High allegedly admitted to burglarizing the office of at least one apartment complex office in Richton Park. Police notified the Richton Park Police Department.

Crystal Fantasia, 31, 301 Osage St., Park Forest, was arrested on February 15 and charged with operation of a motor vehicle with a suspended driver’s license, no insurance, and issued traffic citations charging no seatbelt and improper turn. Police say an officer traveling northbound on Western Avenue observed the vehicle Fantasia was driving allegedly make a sudden left hand turn from the farthest right-hand northbound lane of Western Avenue across all lanes of traffic to enter westbound onto Hemlock Street.

Police were dispatched to a residence in the 400 block of Winnebago Street on February 16 to investigate a report of domestic battery. Police have suspect information and continue to investigate.

Edward K. Chambers, 18, 308 White Oak Lane, University Park, was arrested on February 16 and issued a municipal citation charging possession of cannabis and also issued citations charging disobeying a traffic control signal and driver’s license not on person when an officer patrolling in the area of Western Avenue near North Street reported that the officer had to slam on her brakes because the vehicle Chambers was driving turned east on to Beacon Boulevard, against the traffic signal, according to police.

Clinton J. Henderson, 23, 3640 173rd Court, Lansing, was arrested on February 17 and issued a municipal ticket charging possession of cannabis when a vehicle in which he was a passenger turned from 26th Street on to the west side of Allegheny Street without signaling, according to police.

Police say $300 cash and an iPod and speakers valued at $100 were stolen from an office at a church in the 200 block of Somonauk Street on February 18.

A juvenile was arrested on February 19 and processed on a charge of aggravated battery after police responded on February 18 to the 100 block of Blackhawk Drive in reference to a report of robbery.

An Apple iPad and $200 cash were reported stolen from a residence in the 100 block of Main Street on February 19.

Police say four chrome 20-inch rims and tires valued at $2000 were reported stolen from a vehicle parked in the 23400 block of South Western Avenue on February 20. Police observed the vehicle resting on blocks, missing all four rims and tires.

Ernestine R. Remer, 62, 3478 Western Ave., Park Forest, was arrested on February 20 and charged with domestic-related criminal damage to property and assault when police responded to the 3400 block of Western Avenue to investigate a domestic disturbance complaint.

A vehicle parked in the 100 block of Sycamore Drive was reported vandalized on February 21. Police say the rear passenger tire was slashed, the rear passenger taillight was broken, the glass from both side mirrors was missing, and the driver’s side windshield wiper was bent. Police are investigating.

Police say a metal object was reported shoved into the lock of the driver’s door of a vehicle parked in the first block of Indianwood Boulevard on February 21.

Police were dispatched to the first block of Hemlock Street on February 21 in reference to a report of violations of orders of protection. Police have suspect information and are investigating.

A Garmin GPS valued at $150, a spare ignition key valued at $200, and a wallet were reported stolen from a vehicle parked in the 200 block of Mantua Street on February 21.

Robert E. Carpenter, 20, 17519 Wright St., Lansing, was charged with battery when police responded to Park Forest Academy, 375 Oswego Street, to investigate a report of an assault.

Dante L. Davis, 28, 111 Elm St., Park Forest, was arrested on February 20 and charged with possession of cannabis with intent to deliver and issued a citation charging driving while license was revoked after police secured a search warrant for the residence at which Davis resides on February 19. Police say they conducted surveillance on that residence and observed Davis and a woman exit the residence and leave, driving southbound on Elm Street. Police say they stopped the vehicle Davis was driving because of the warrant and an officer’s knowledge that Davis’ Illinois driver’s license was revoked. The passenger in the vehicle, Tashea L. Taylor, 27, 111 Elm St., Park Forest, was also arrested and charged with possession of cannabis.