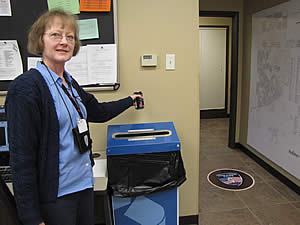 Police were dispatched to the 200 block of Mohawk Street on April 16 to investigate a report of a domestic disturbance. No charges were pressed. However, police removed the alleged offender from the residence and advised him to not return to the residence without a police escort.

Police were dispatched to the 200 block of Arcadia Street on April 16 to investigate a report of a disturbance. During their investigation, officers observed that a window of a residence was open and personal articles such as blankets and jewelry were strewn about on the ground between two residences. Police also observed that the windshield of a vehicle had been smashed. Police continue to investigate.

Sean A. Grant, 23, 328 Sioux St., Park Forest, as arrested on April 17 and charged with disorderly conduct: making a false police report after police were dispatched to the 300 block of Sioux Street to investigate a report of a burglary to an automobile. Police say Grant told them that his car was actually burglarized in Harvey, Illinois, but he filed the report in Park Forest because he does not like dealing with the Harvey Police Department and did not think it was important what town the car was parked in when the items were taken, according to police.

Freddie L. Green, Jr., 53, 2703 Turtle Creek Dr., Hazel Crest, was arrested on April 19 and charged with possession of drug paraphernalia, possession of a controlled substance, and issued traffic citations charging only one headlight and no proof of insurance. An officer stopped the vehicle Green was driving, which was traveling northbound on Western Avenue near Birch Street at approximately 1:33 a.m., when the officer observed that the vehicle had only one operating headlight.

Cortez J. Scott, 25, 10 McCarthy Rd., Park Forest, was arrested on April 21 and charged with possession of cannabis when an officer observed an occupied vehicle parked in the 23400 block of Western Avenue just before 1 a.m. with windows rolled down. A passenger in the car, Robert J. Johnson, 23, 1831 222nd Place, Chicago Heights, was arrested and charged with possession of open alcohol in a vehicle.

A 42-inch Black plasma television and a Dell desktop computer with a touch screen were reported stolen from a residence in the 200 block of Indianwood Boulevard on April 21. A window of the residence was discovered shattered.

Andre L. Hobbes, 23, 211 N. Orchard Dr., Park Forest, was arrested on April 22 and charged with domestic battery when police were dispatched to the 200 block of North Orchard Drive to investigate a report of domestic battery.